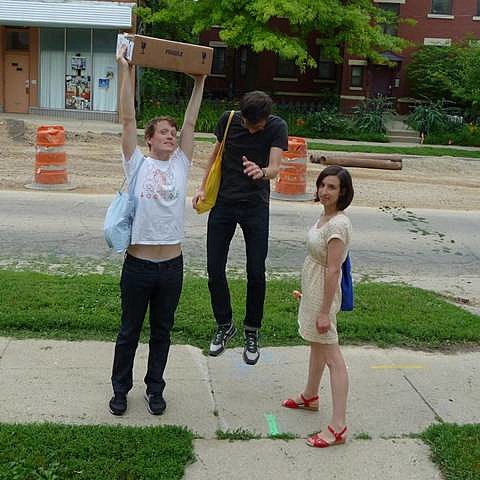 Brooklyn indie rock trio Radical Dads are busy working on their sophomore album, but in the meantime they've contributed a track to a four-way split 7" single titled Torrential Zen which pits them and another Brooklyn band, Dinosaur Feathers, against two band from Milwaukee: The Fatty Acids, and Sat. Nite Duets, You can stream RD's contribution, "Holidays Underwater," below.

The single is out Friday (11/9) and you can buy one from the band directly that night when they open for Forgetters at Death by Audio. Radical Dads and Dinosaur Feathers will both play an official Torrential Zen release party happening November 16 at Big Snow Buffalo Lodge with Laser Background and Dead Stars. The only other show on RD's horizon is January 18 at Glasslands with Georgia garage rockers Gringo Star and Backwords. Advance tickets for that one are available.

Speaking of Forgetters (the project of Jawbreaker/Jets to Brazil's Blake Schwarzenbach and Against Me!'s Kevin Mahon), they recently announced their new bassist, following the departure of former bassist, Caroline Paquita. The duo will now be joined by Michelle Proffit, frontwoman of Hiretsukan. You can also catch Forgetters opening for Bouncing Souls at one of their holiday shows at The Stone Pony in Asbury Park (12/29).

Radical Dads track stream is below.