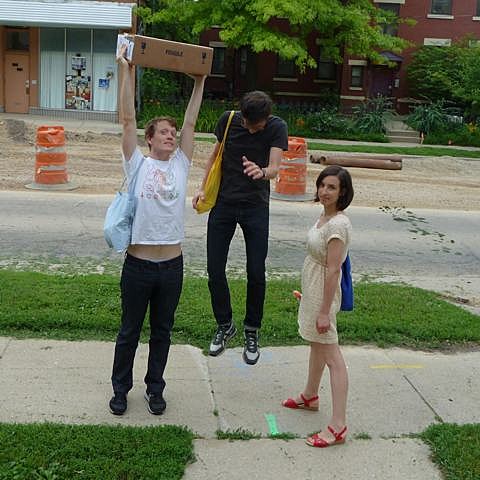 In addition to the Seaport Music Festival and 4Knots which both happen this summer on Pier 17, I'm happy to report that the Sound Bites Series (which I curate, shameless plug) will return for its fourth year at the Seaport's Fulton Stall Market every Sunday afternoon in August. UPDATE: Fulton Stall Market is going on break in August, so shows will now happen at the Front/Row Stage on the corner of Fulton and Front (right by Smorgasbar).

UPDATE #2: Leapling have dropped out, unfortunately, but happily we got Boston's Bent Shapes to take their slot on 8/25. They also play the night before at Cake Shop.

This year's line-up is:

There will be a DJ (probably me) at 3PM with the bands playing at 4PM and it's all free.

Some of these bands are playing before that. You can catch Philadelphia's Literature tonight at Cake Shop with Georgia indie bands Gold-Bears and Small Reactions, as well as locals The Hairs. That's an extremely solid bill of energetic indie pop.

Grand Resort's next NYC show will be at Glasslands on July 18 with headliners The Beets, plus Wild Yaks and Army Men. Tickets are on sale.

Radical Dads are currently touring Japan but will play The Rock Shop on July 20 with Bear Ceuse, The Can't Tells and Amy Klein.

Streams of all four bands playing the 2013 Sound Bites series this year are below.