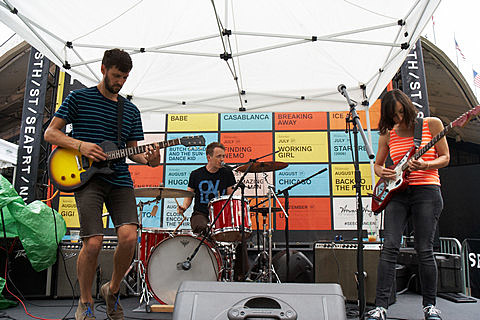 Radical Dads second album, Rapid Realty, came out back in May and the Brooklyn trio are already back in the studio working on its follow-up which should be out sometime in the first half of 2014. In the meantime, the Dads have released a new 7" out via EAU Records in which only 300 were pressed, each with unique silkscreened cover art created by label owner Sam Martineau. Order yours here and the digital version is available too via Uninhabitable Mansions. We've got the premiere of it's b-side, "Slammer," which you can listen to below. The a-side is streamable below too.

Radical Dads have a few shows coming, including the previously mentioned Kidrockers show at Brooklyn Bowl on December 15 with Small Black (tickets). They've got a couple grown-up shows as well in NYC, too: Sunday (11/10) at Death by Audio with Butter the Children, Sat. Nite Duets, and Harbor Lights; and then the previously discussed show at Shea Stadium on November 23 with Porches, Sirs, Shark?, and Carmen.

All dates are listed, along with single streams, below...