Radio Moscow at Bowery Ballroom in 2012 (more by Greg Cristman) 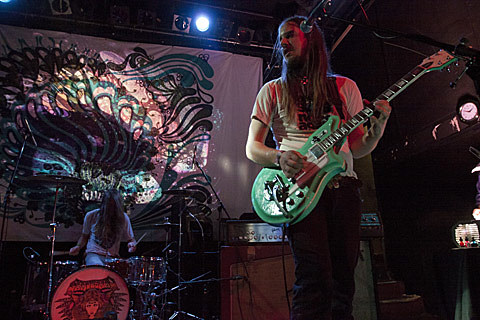 As discussed, Iowa psychedelic band Radio Moscow are going on a tour with doom-metal institution Pentagram, though they're not on the NYC stop which happens November 1 at Gramercy Theatre with Blood Ceremony, Bang and Kings Destroy (tickets). Instead, Radio Moscow will be in California that day for Day of the Shred with Red Fang, Weedeater, Windhand, Bongripper, ASG, Danava and more; but they've since added their own NYC show happening right after the Pentagram tour.

The riffers will team up with Black Wail and more TBA for a NYC gig on November 4 at Saint Vitus. Tickets for that show are on sale now. Updated dates are listed below.

Radio Moscow's newest album, Magical Dirt, came out earlier this year. Check out a stream of its track, "Death of a Queen," with the list of tour dates, below...