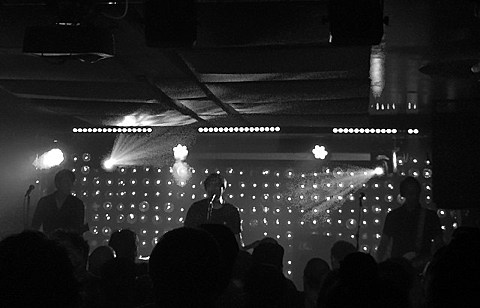 Radioactivity brought their tour to NYC last night (7/30) at Baby's All Right in support of this year's great Silent Kill. They did basically everything you want out of a punk show -- short set, but no breaks in between songs for banter or anything. Just rocking straight through. If you haven't checked out the band (which includes members of The Marked Men) yet, we highly recommend it. It might not be totally accurate to call it "pop punk" but it's classic pop songwriting and classic punk energy. Kinda like if the Ramones were raised on '70s power pop instead of '60s girl groups.

Opening was Flesh World, the new band with members of Brilliant Colors and Limp Wrist, who were a great match for Radioactivity and also sounded excellent. They're a bit moodier, use a little more reverb, and sometimes dive into C-86/post-punk territory (like the bassline of set-closer "Church of Flesh"), but mostly up that same alley of driving punk.

Flesh World play two more shows in NYC this week, one of which is with Total Control, Lust For Youth and Sannhet on Saturday (8/1) at MHOW (tix). That's the second of two Total Control shows this week, the first of which is TONIGHT (7/31) at Palisades (tix).

Check out videos of Radioactivity and Flesh World at Baby's (via Heartbreaking Bravery) below...