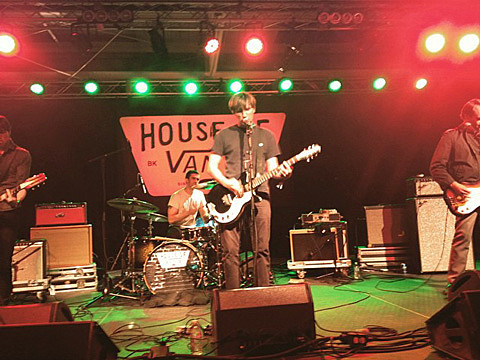 Texas rippers Radioactivity were in town over Memorial Day Weekend, playing House of Vans' "Almost Summer" series on Saturday (5/23) with Parquet Courts and Pill. It probably felt like summer was already here in House of Vans which can be a real a hotbox. Did you go?

The band, whose new album Silent Kill will be out June 30 on Dirtnap, have just announced another NYC show, playing Baby's All Right on July 30. Presented by Noisey, the show also has San Francisco's Flesh World and Honey Radar, making for a stacked bill.. Tickets are on sale now. Updated Radioactivity tour dates are listed, along with a song stream from the new LP, below.

If you're unfamiliar, Indiana's Honey Radar make sludgy, overdriven pop as can be heard on their excellent new EP, The Rabbit's Voice. If you dug Sic Alps or '90s-era Slumberland Records bands, you should definitely give it a listen -- it's streaming below. That Baby's show is the only date for Honey Radar at the moment.

Flesh World, which features members of Brilliant Colors and Limp Wrist, will play again a couple nights after the Baby's show, opening for Total Control at Music Hall of Williamsburg (8/1) with Lust For Youth and Sannhet on the bill as well. Tickets are still available. Updated tour dates for Flesh World are listed, plus a song from their forthcoming debut LP, below.