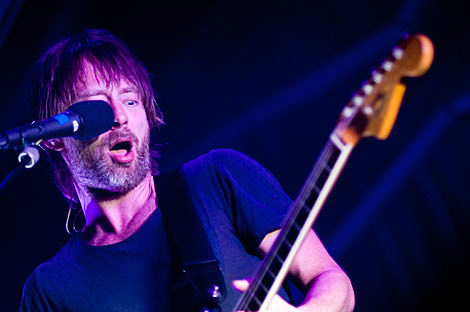 Apart from the band's appearance on Saturday Night Live, Radiohead will also be a guest on The Colbert Report on Comedy Central. Not just as a musical guest, but Stephen Colbert will have the band on for an hour-long special. Radiohead will be playing four songs, some from The King Of Limbs, but also unreleased track The Daily Mail. An extra song will be made available online.
Stephen Colbert: "I look forward to meeting the Radioheads and leveraging their anti-corporate indie cred to raise brand awareness for my sponsors." [At Ease]

SNL is the 24th (and hopefully there's more to announce still too). And Radiohead is playing 2 nights at Roseland too!

In related news, Thom Yorke played a surprise acoustic solo show in England last night (9/18), and he recently revealed a new so-so solo track on the radio called "The Twist". You can listen to the glitchy techno number, which was part of a 25 minute mix that you can also hear, below...