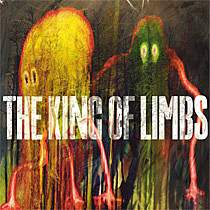 Radiohead's new record, The King Of Limbs, is presented here as the world's first (perhaps) Newspaper Album, comprising:
* Two clear 10" vinyl records in a purpose-built record sleeve.
* A compact disc.
* Many large sheets of artwork, 625 tiny pieces of artwork and a full-colour piece of oxo-degradeable plastic to hold it all together.
* The Newspaper Album comes with a digital download that is compatible with all good digital media players.
* The Newspaper Album will be shipped on Monday 9th May 2011 you can, however, enjoy the download on Saturday 19th February 2011.
* Shipping is included in the prices shown.
* One lucky owner of the digital version of The King Of Limbs, purchased from this website, will receive a signed 2 track 12" vinyl.
[order the "Newspaper" or digital-only versions @ thekingoflimbs.com

Radiohead.com merely says, "Thank You For Waiting." AND, "the album will be on general release on CD & 12" vinyl in all music stores and major digital retailers from March 28th. As with In Rainbows, the band will partner with XL Recordings, TBD Records in the USA & Canada and Hostess Entertainment in Japan and Asia. The King Of Limbs was produced by longtime collaborator, Nigel Godrich."