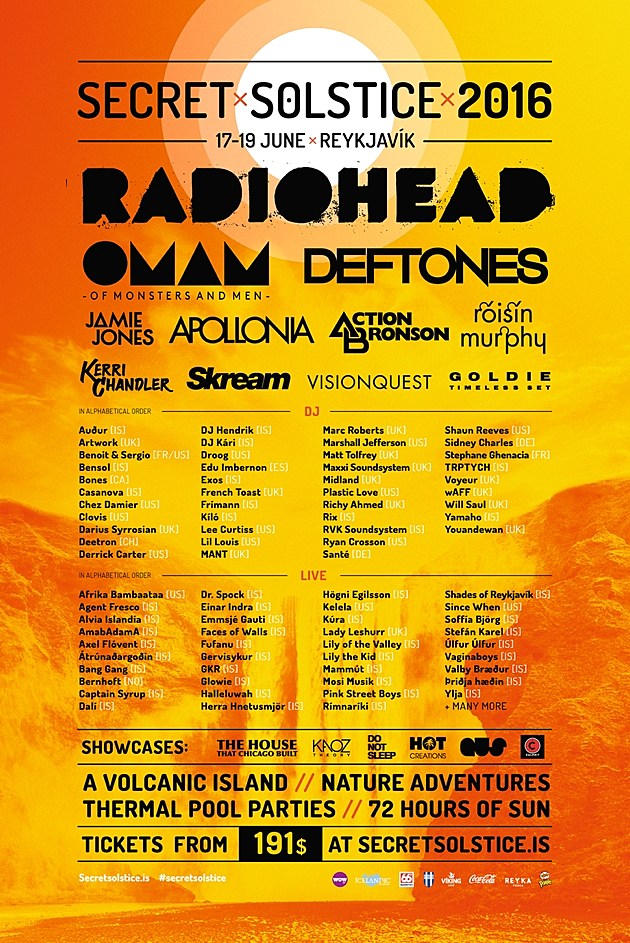 If you have ever wanted to party during seventy-two consecutive hours of daylight or dance inside a glacier, then the Secret Solstice festival in Iceland is the event for you. The third annual Secret Solstice returns to Reykjavik from June 17 to 19 and features an extensive lineup, including Radiohead's Icelandic debut, plus several optional musical excursions available that take advantage of Iceland's sublime beauty.

Secret Solstice offers a mix of live bands and DJs performing in Iceland's capital, a cozy hamlet in comparison to New York, but home to as nearly a vibrant cultural scene including delicious cuisine, craft beers and a rich wealth of music. Of Monsters and Men are the biggest local band slated to play. Another popular local band Mammút are lesser known in the States but their last album, Komdu til mín svarta systir, won several Icelandic Music Awards including one for album of the year.

Högni Egilsson, like so many other Icelanders, makes his rounds in the local circuit. He has played or worked with Hjaltalin, Gus Gus and John Grant and probably knows everyone else on the bill. His recent solo composition features a 40 piece choir and explores the light of the mind. Sounds like he might be someone to speak to if you find yourself unable to sleep under the perpetual sun.

Or maybe Action Bronson will be the man to speak to around Reykjavik. While you probably shouldn't get close to him on stage, lest you be tossed off, you could trail him and ask if he has any recommendations on where to eat. The former chef and now host of the Fuck, That's Delicious television show will probably be dabbling in Iceland's local dishes of rotten shark or puffin when he isn't performing.

Rounding out the headliners are Deftones, Apollonia, Roisin Murphy, Skream and Goldie. Other artists of note include up-and-coming British rapper Lady Leshurr, hip hop pioneer Afrika Bambaataa, R&B singer Kelela, and plenty more. While those artists and Radiohead are not to be missed, neither is the natural beauty of Iceland. Plan to spend some time luxuriating in the country's geothermal baths, traversing its glaciers or gazing down its waterfalls. Secret Solstice organizers will be offering limited tickets for unique excursions including the aforementioned party inside a glacier (Langjökull), a secret lagoon bash and a wild, festive "midnight sun" cruise.

Tickets and package information are available now at the official site. but venue and schedule information is still pending. The lineup for the main festival follows below but expect more to be announced, including the acts playing at each excursion.

Lineup:
Radiohead [UK]
Deftones [US]
Of Monsters And Men [IS]
Jamie Jones [UK]
Skream [UK]
Róisín Murphy [IE]
Action Bronson [US]
Kerri Chandler [US]
Goldie [UK]
Lady Leshurr [UK]
Richy Ahmed [UK]
Visionquest [US]
Edu Imbernon [ES]
Bernhoft [NO]
Afrika Bambaataa [US]
Apollonia [FR]
Santé [DE]
Deetron [CH]
Darius Syrrosian [UK]
Derrick Carter [US]
Kelela [US]
Bang Gang [IS]
Mammút [IS]
Högni Egilsson [IS]
Agent Fresco [IS]
Benoit & Sergio [FR/US]
Lil Louis [US]
Úlfur Úlfur [IS]
AmabAdamA [IS]
Lee Curtiss [US]
Ryan Crosson [US]
Matt Tolfrey [UK]
Shaun Reeves [US]
Kúra [IS]
Fufanu [IS]
Ylja [IS]
Emmsjé Gauti [IS]
Droog [US]
Sidney Charles [DE]
Midland [UK]
wAFF [UK]
Maxxi Soundsystem [UK]
Chez Damier [US]
Marshall Jefferson [US]
Soffía Björg [IS]
Herra Hnetusmjör [IS]
Dr.Spock [IS]
Will Saul [UK]
Youandewan [UK]
Axel Flóvent [IS]
Shades of Reykjavík [IS]
Glowie [IS]
Exos [IS]
Bensol [IS]
Voyeur [UK]
Artwork [UK]
Yamaho [IS]
Rix [IS]
Plastic Love [US]
Clovis [US]
Bones [CA]
MANT [UK]
Þriðja Hæðin [IS]
Faces of Walls [IS]
RVK Soundsystem [IS]
DJ Hendrik [IS]
Pink Street Boys [IS]
Halleluwah [IS]
Lily The Kid [IS]
Vaginaboys [IS]
GKR [IS]
Stephane Ghenacia [FR]
Lily Of The Valley [IS]
EinarIndra [IS]
Gervisykur [IS]
Valby Bræður [IS]
Mosi Musik [IS]
Alvia Islandia [IS]
DJ Kári [IS]
Frímann [IS]
Casanova [IS]
French Toast [UK]
Dalí [IS]
Stefán Karel [IS]
Marc Roberts [UK]
Captain Syrup [IS]
Auður [IS]
Átrúnaðargoðin [IS]
TRPTYCH [IS]
Kíló [IS]
Rímnaríki [IS]
Since When [US]