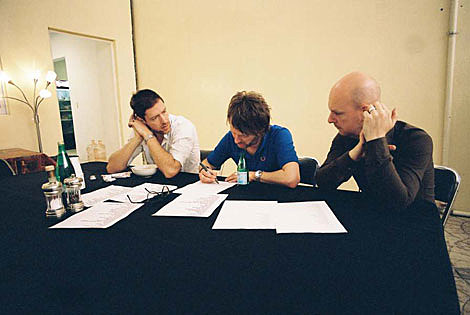 Radiohead have gone back into the studio to start work on the follow-up to their 2007 album In Rainbows.

"We just went in last week," bassist Colin Greenwood said. "It was really good. It was really noisy and chaotic and really fun."

But the group do not have fully formed songs yet, he said.

"We're at the stage where we've got the big Lego box out and we've tipped it out on the floor and we're looking at all the bits and thinking, what next?"

The new album, which will be their eighth, will again see producer Nigel Godrich work with the band. [BBC]

actually, because the David Byrne EP starts playing automatically, i removed it. Listen to it HERE. Read about it below....

Some time ago Amnesty International asked if I might do "something" for that organization this year- (in previous years I had done one of my tour dates as a benefit for them). Amnesty has such an amazing and consistent track record of speaking out and helping to illuminate courageous people who might otherwise not be heard from so the answer was "yes." It was decided to record some songs from my current tour for them to be sold as a download with the proceeds going to Amnesty. As there are no physical costs with digital distribution this means more of the sales percentage actually goes to where it's supposed to. So, thank you for supporting a great organization and I hope you like these recordings too. They will be available exclusively here on Monday, 5/11/09.

The tour isn't over yet. It has been exhilarating for all the musicians, singers, dancers and the crew as well - so we all voted to keep rolling on through summer 09. On these live shows I decided to use the connection of Brian Eno- as a collaborator, producer or musician- as the thread that links some material from the past with a group of songs done last year. Most of the time music listeners are blissfully unaware of the contributions of a record producer, and sometimes even of which musicians who play on a record as well...so the Eno linking device might not be as self evident as I imagine. However, the device also allowed me to include a fair number of songs in the live set that people are somewhat familiar with, which wasn't exactly accidental.

For me, there are rhythmic and structural links between the older material and the new- though there are lyrical and melodic differences too that I, at least, can hear. Those musical parallels help the live show maintain some kind of musical thematic unity- they help the show from becoming a random hodge podge of songs. I've even heard someone say to us backstage that they felt the show tells a story. They didn't elaborate as to what kind of story.
DB
Midtown