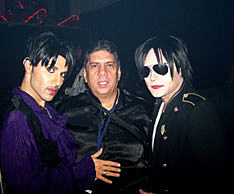 "A week after Miley Cyrus shared with the world her plans to 'ruin' Radiohead after they snubbed the young starlet at the Grammy Awards, the band has responded to the singer's threat... The band wasn't amused by her story. 'When Miley grows up, she'll learn not to have such a sense of entitlement,' the band told the new issue of Us Weekly in a statement." [MTV]

"Dozens of investors who came to federal court in New York to hear Bernard Madoff's admission that he ran a $65 billion Ponzi scheme in which he lied and stole for decades applauded his jailing." [Bloomberg]

"Yet Miley is not the only star that has a beef with the band. Kanye West is another temperamental superstar who was also snubbed by the band. West told audiences at his VH1 Storytellers taping that he too was dissed by the band at the Grammy Awards" [andPOP]

"We are working on new material" [Ed O'Brien]

"U2 celebrated the number one debut of its new album 'No Line on the Horizon' with an intimate gathering for a few friends Wednesday night." [Boston Globe]

"It's not U2, but 'The Tonight Show With Jay Leno' will get its own multiple dose of pop royalty this month. Prince will perform on three consecutive nights on the NBC program as he girds for the release of a pair of new albums. The mini-residency will run March 25-27; he also plans to hit the 'Tonight' stage May 28 for Leno's next-to-last night as host of the venerable talk show." [Reuters]

"Five new shows have been added to Michael Jackson's London run, bringing the total to 50, according to Randy Phillips, CEO of AEG Live, promoter of the shows." [Billboard]

"Hundreds of fans have queued through the night to buy the first tickets to Michael Jackson's 'final curtain call' of concerts in London." [CNN]