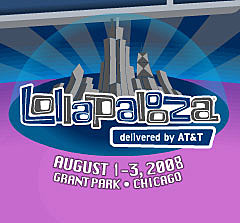 Lollapalooza 2008 headliners confirmed
Lollapalooza's Austin, Texas-based promoters C3 Presents are not scheduled to make their official announcement of the acts performing at this year's weekend-long music festival in Grant Park until Monday, but the Sun-Times has confirmed through industry sources all of the major artists.

Art-rock giants Radiohead and Nine Inch Nails, the reunited Rage Against the Machine, Jack White's side project the Raconteurs and hometown heroes Wilco and Kanye West will headline the main stages on Aug. 1-3.

The Raconteurs, Wilco and West will each be making their second appearance at the reinvented destination festival. Other repeaters among the more than 100 acts on this year's bill are Gnarls Barkley, the Black Keys, Broken Social Scene, G. Love & Special Sauce, Blues Traveler and Mates of State.

Quite a few of the other acts -- including many of the most promising -- have earlier performed at Chicago's two independently produced music festivals, Pitchfork and Intonation. These include Bloc Party, Cat Power, Stephen Malkmus, Girl Talk, Kid Sister, Office, the Cool Kids, Battles, the Go! Team, Jamie Lidell and Grizzly Bear.

Advance three-day passes are now on sale for a limited time for $190 (after which the price increases to $205) at www.lollapalooza.com. [Chicago Sun Times] (thx Hiro)