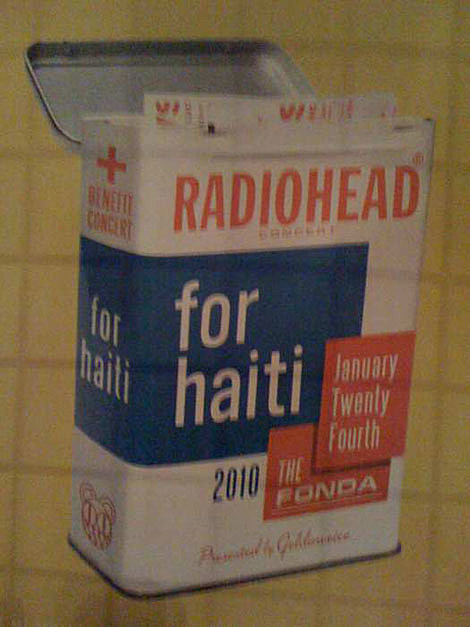 "Sing along," Thom Yorke told the audience at the Henry Fonda Theater on Sunday night, in case "I forget the words." He didn't, and he and Radiohead proceeded to give the crowd an incandescent version of "Fake Plastic Trees," the rousing second song in a show that was the hottest ticket in town -- and a noble one at the same time.

One of the most esteemed bands in the world has been in Los Angeles recording new music (their presence has been one of the worst kept "secrets" in recent music history), and after the staggering calamity in Haiti, the band was inspired to stage an impromptu benefit show.

The highlight? Pick one. Perhaps the solo piano rendition of "Everything in It's Right Place." The piano was pushed center-stage for Yorke, who seemed to be invigorated by the low-pressure forum and, perhaps, by the heartfelt ethos.

"It's like a memory exercise," Yorke said of a show that dipped into the band's seven-album catalog. [LA Times]

Radiohead's Haiti benefit on Sunday night raised a reported $573,000 for Oxfam Haiti. The band took a break from recording their eighth album to play the show. The minimum bid for tickets, which were sold via auction, was $475.

Radiohead "Everything In Its Right Place" live at Fonda (Haiti relief)