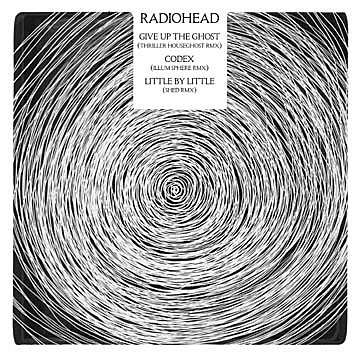 "Alec Baldwin will be in some rockin' good company when he hosts Saturday Night Live for a record-breaking 16th time on Sept. 24. Grammy-winners Radiohead, who last stopped by Studio 8H in 2000 with host Kate Hudson, will help Baldwin kick off the 37th season of SNL as musical guests. Radiohead's latest record, The King of Limbs, was released back in February." [EW]

Radiohead releases TKOL RMX 1234567, a double CD of all the commisioned remixes for The King of Limbs via tbd Records on October 11. Full tracklist below.

The remixes all come from the series of twelve-inch singles the band has been releasing since July. The next one, pictured above, is out August 15th.

More importantly.... Radiohead in NYC on Sept 24? A US release on Oct 11? Let's hope that means live shows too!