"Walls of Tom #radiohead" (via paulvkieu) 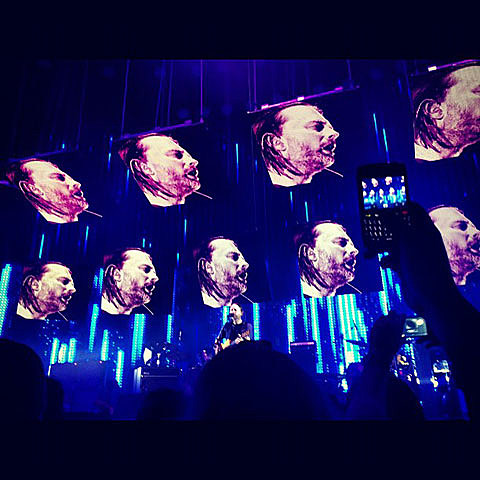 How do you capture the energy -- both positive and negative -- of the past 50 years by using instruments perfected in the 18th century and made of wood, glue and horsehair?

That challenge lies at the very heart of this album, which brings together one of rock and electronic music's superheroes, Radiohead's Jonny Greenwood, with one of his own idols: the septuagenarian Polish composer Krzysztof Penderecki. The collection features two string pieces written by the elder composer, 1960's Threnody for the Victims of Hiroshima and 1961's Polymorphia for 48 strings, juxtaposed with two of Greenwood's similarly set answers to Penderecki's work: Popcorn Superhet Receiver (inspired by Threnody) and 48 Responses to Polymorphia. Here, they both choose to use a seemingly antiquated vehicle -- orchestral strings -- to convey the noise, chaos and energy of our time. The results are ear-tingling.

Stream the whole thing at NPR.

Radiohead are currently out touring North America. Upcoming shows include Dallas and Austin. Recent shows include Houston, Miami, and Atlanta where one group of hardcore fans was NOT happy about how they were treated when the doors opened, or should I say didn't open. Their story and video below...

"Radiohead Ticket Fiasco Philips Arena Atlanta GA March 1 2012. People with waste pre sale tickets, some who were there since 4am in line were not allowed entrance into the arena because of broken scanners. Two lines for the show one on top of the street and the one at the bottom of the venue. The staff said both doors would open at the same time and allow both sides to go in at the same time. We had an advantage as we were closer to the floor. However with the broken scanners the people on the top side were able to get in earlier and faster. Eventually we were allowed in by them tearing our tickets but the damage was done. The rail was gone for the people who were early in line. Fun times."

It's rumored that Radiohead will be announcing more dates soon. The latest rumor includes a June 1st show at Prudential Center in NJ, though I'm not going to believe it until I see it via Radiohead) (and not via Aids Bunny) (the previous rumor said there would be two nights at MSG around Bonnaroo, but now the rumor people are leaning towards the NJ show instead) (stay tuned).

UPDATE: June 1st at Prudential Center is true! May 31st too! All dates HERE.

Filed Under: Jonny Greenwood, Krzysztof Penderecki, Radiohead, Thom Yorke, tickets
Categories: Music News
Comments
Leave A Comment
Pitchfork publishes a new 150 Best Albums of the 1990s list
Pitchfork publishes a new Best Songs of the 1990s list
36 New Songs Out Today
The Callous Daoboys’ mathcore is for everyone: “I don’t want to be this middling heavy band, I wanna be The 1975″
“There’s no Radiohead at the moment,” says Ed O’Brien
Watch The Smile’s music video for “Pana-vision” ft ‘Peaky Blinders’ footage