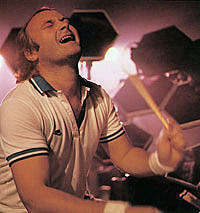 In the UK press today, there appeared some articles about Phil's physical state, with some slightly misleading headlines. Here, in Phil's own words, are how he describes his situation:

"There isn't any drama regarding my 'disability' and playing drums.
Somehow during the last Genesis tour I dislocated some vertebrae in my upper neck and that affected my hands. After a successful operation on my neck, my hands still can't function normally.

"Maybe in a year or so it will change, but for now it is impossible for me to play drums or piano. I am not in any 'distressed' state, stuff happens in life."

In other drummers named Phil news, NME reports that "Radiohead drummer Phil Selway has announced that he is set to release a solo album."

Selway, who sings on the album, is currently in the process of recording the as-yet untitled record in his band's Oxfordshire studio.

He enlisted the services of Wilco members Glenn Kotche and Pat Sansone to play on the project, and multi-instrumentalist solo artist Lisa Germano and bass player Sebastian Steinberg have also contributed.

No release date or any more details yet. A video of Phil McKenna playing drums, below...