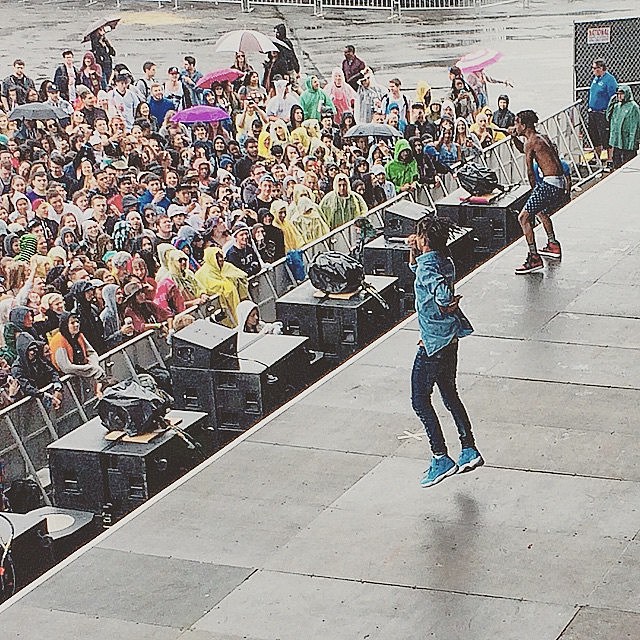 The first of three days of Governors Ball is just getting started, and though the little rain during their set was hardly a big deal, what happened to Rae Sremmurd on stage definitely was. As Billboard reports...

Ten minutes into a set that began at 1:30, Rae Sremmurd performed their song "Unlock The Swag" when Slim Jimmy tumbled off a speaker in front of the crowd. The rapper was carried back onstage with the help of two security guards and placed behind the DJ booth.

His Rae Sremmurd partner, Swae Lee, cut off "Unlock The Swag" after a few bars to examine the situation. He then told the crowd, "This shit is pretty crazy. ... This n---a's leg is like, split open, I'm serious."

Slim Jimmy was later seen leaving the grounds in an ambulance, which may be where he is laying all bandaged up in this Instagram Rae Sremmurd posted:

@jxmmis is doing ok thanks to all the fans #GovernorsBallNYC2015

Glad to hear is doing ok! Check out an overhead video, showing Rae Sremmurd's impressive (and umbrella filled) early crowd, and some other pics, below.

Governors Ball continues today with sets by The Decemberists, St. Vincent, Ratatat, DFA 1979, Chromeo, My Morning Jacket, Drake and more. Some of it will be broadcast on SiriusXM.

Before #RaeSremmurd get to the Northby Advanced stage, they got on the #GovBallNYC stage and threw a party.