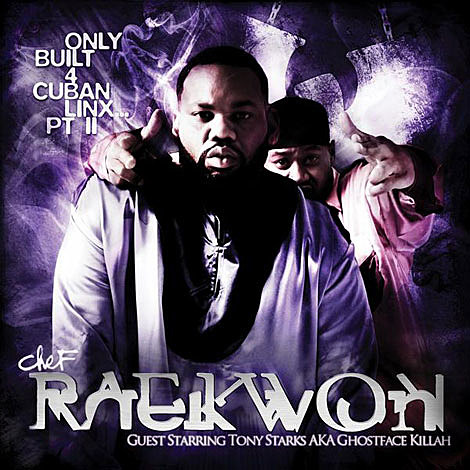 On September 9, Raekwon The Chef of the Wu-Tang Clan is dropping the much-awaited sequel to his 1995 classic Only Built 4 Cuban Linx... a triumph of storytelling, technically proficient rhymes and gritty Shaolin-style production. Granted, he has kept to this formula since his debut with the Clan, but Part II will be his greatest triumph of the decade, with production by RZA as well as Dr. Dre, J. Dilla, Pete Rock, Marly Marl, Necro, The Alchemist and Allah Mathematics, with rhymes contributed by Slick Rick, Busta Rhymes, The Lox. Ghostface Killah will reprise his role as the secondary rapper on the album, and there will be also be multiple appearances by Wu-Tang stalwarts Method Man, GZA and Inspectah Deck.

At 8pm on the release date, Santos Party House will be holding the concert and celebration, which promises to be flat out the best real hip-hop event the city has seen in a long time.

The amazing lineup for the Only Built 4 Cuban Linx II release party at Santos on September 8th includes (of course) Raekwon, as well as key collaborator Ghostface. Joining them at the Diddy-hosted show will be the likes of Beanie Sigel, Bustah Rhymes, Talib Kweli, Slick Rick, Lyfe Jennings and more. The full cast is below with the flyer. No word on tickets yet.

Two nights later, S.O.B.'s hosts its own Raekwon release show with Raekwon & Ghostface Killah. If there will be more special guests at that show too, they aren't announced. Tickets for the September 10th show are on sale.

Ghostface's own new record, The Wizard of Poetry, is due on September 29th on Def Jam. He's got his own show coming up at BB King's in November. "Baby," the first video from that new disc, is posted below.

Raekwon appeared on the bill of this year's Rock the Bells tour. Videos from his Boston and Jones Beach appearances are below... 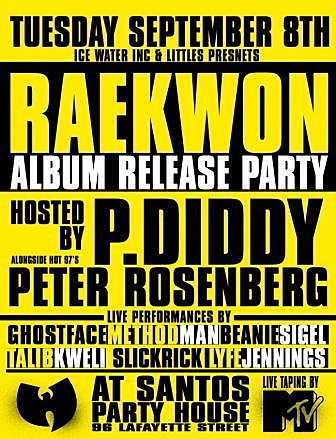 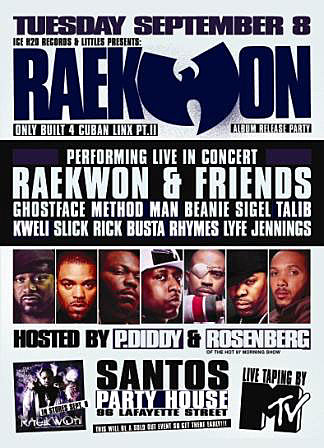 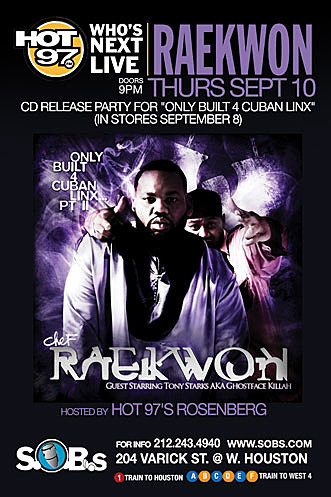 Raekwon at Rock The Bells Boston