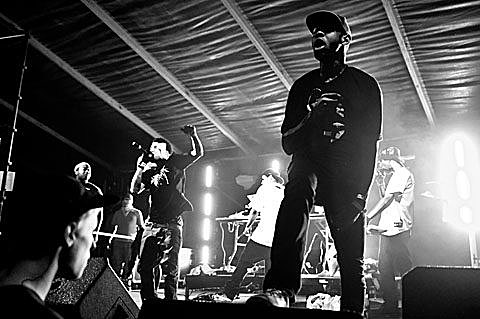 Hot 97 DJ Peter Rosenberg, who seems really big on this whole "real hip hop" thing, will be presenting a show at Best Buy Theater on July 26 with Tyler, the Creator & Earl Sweatshirt and Raekwon, which is being billed as "A Night of Real Hip Hop." It's probably safe to assume that Nicki MInaj won't be there. Tickets for the Best Buy Theater show go on sale Friday (6/15) at noon.

It's the only date for the Odd Future boys at the moment except for Jay-Z's Made In America Fest in September. They're probably busy working on the second season of their Adult Swim show, Loiter Squad, or something. Or maybe Tyler is still finishing up his new album, Wolf, which was set to come out in May (it didn't). Meanwhile, it was recently revealed in a NY Times article that Earl is also working on a new album, and it will come out on his own Columbia-distributed imprint, Tan Cressida.

Frank Ocean recently announced a new album and tour too. If you missed it, the 10-minute single, Pyramids," is downloadable above and streamable below.

For Raekwon, the Best Buy Theater show comes at the end of an international tour that he's currently on (he plays Boston tonight). Also his Wu-Block project, with Ghostface Killah, D-Block/The LOX members Sheek Louch, Jadakiss, and Styles P, plays Rock the Bells in September. All Raekwon dates are listed below.