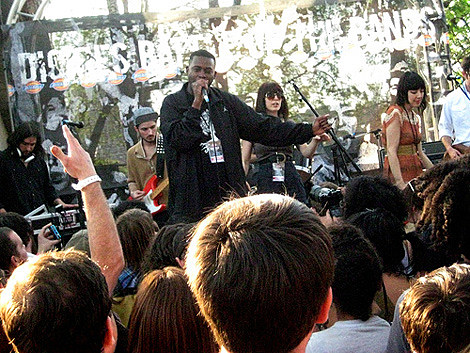 Still no word on a Gucci Mane/Beirut collabo album, but Wu-Tanger GZA has been hard at work rocking remixes and dropping collabos a-plenty. After appearing on a remix of Mando Diao's "Dance With Somebody" w/ Cadence Weapon by The Hood Internet (get that above), GZA has also popped up on another Hood Internet remix, this time of Salvador Santana's "Keyboard City". That remix inspired a second (a re-remix?) this time with Mr Green Skull himself, Dan Deacon.

Originally, GZA was featured over a remix of the song "Keyboard City" done by The Hood Internet. Now, Dan Deacon took that remix and dissected it into this an awesome blend of Vocoder / electro madness.
This collaboration was inspired by the idea of GZA and Dan Deacon working together and Salvador Santana a platform was set for more original material between the two in the future. GZA first caught wind of Dan Deacon earlier this fall and after a connection via their publicist, Dan ended up taking GZA and Salvador's remix and putting his own twist on it.

It's not the first time that the Genius has collabo'd with indie artists (he teamed up with Black Lips at SXSW, dropped mathematics on a Peter Bjorn & John's forthcoming Living Thing remix LP, and played with King Khan at FFF and elsewhere), and it won't be the last. So far we already know that Fucked Up and Devendra Banhart have contributed some original material for GZA, but now comes word that Health have remixed a track, Har Mar Superstar is on board and Kevin Barnes (Of Montreal) has also hooked up some science for GZA which will appear on his new album out in late spring of 2010. Look for it.

GZA also recently popped up on Fucked Up's charity single which is on iTunes now.

GZA appeared on the stupid dope Raekwon album Only Built For Cuban Linx Pt II, and now that the onslaught of praise has died down somewhat, that Staten Island representative is on a short tour to remind the haters why he rules faces. Count on support from Queensbridge representatives Capone n Noreaga (who aim to "blow holes in your Versace") as well as Queen Yonasda. The trio hits Irving Plaza on 12/16, tickets are still on sale.

Dig on some videos below, including one of GZA with King Khan, as well as Raekwon tour dates...