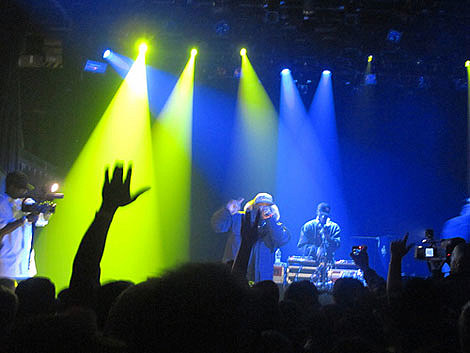 Backed only by DJ Symphony on turntables and Raekwon's brother Don P on vocals, the set could have used the energy of the other rappers who invade the album. Raekwon's set ran to 90 minutes, but it felt here and gone. It included the appearance of a huge cake in the shape of a purple cassette -- the original "Cuban Linx" album, from 1995, is commonly called the Purple Tape -- and an assortment of friends and business associates, either texting or appearing to smoke weed onstage. Two notable things happened, neither musical.

The songs came fast, one after another, without stagecraft or pacing. The set went back to early tracks by his old collective, the Wu-Tang Clan, touched on "Cuban Linx" Part 1 and settled in for stretches of the new album, including the scabrous, seedy "Gihad" and the imagistic, violent "Surgical Gloves."

There weren't as many Wu-Tang Clan cameos as might have been expected, aside from Cappadonna, who rapped verses on "Ice Cream." But halfway through, another member of the extended Wu family appeared: Cherry Jones, the mother of the Wu-Tang rapper Ol' Dirty Bastard, who died in 2004. She and Raekwon hugged, without speaking, for nearly a minute. Raekwon praised Dirty and his mother and then performed "Ason Jones," a tribute to Dirty on the new CD, with some emotional difficulty, his movements creaky, as if he needed oil. (He stopped the song at one point, shaking his head in sorrow, swearing and then collecting himself.)

Near the end -- after the duo Capone-N-Noreaga briefly hijacked the set -- Busta Rhymes, a longtime Raekwon booster, came onstage to congratulate his friend. Busta Rhymes likes to talk. Ten minutes later he was still there, praising Raekwon's rhymes and metaphors. Raekwon slumped against the opposite wall, looking humble, grateful and worn out. [NY Times]

Mos Def was supposed to play Highline Ballroom last night (12/20), but the show was cancelled due to the weather and rescheduled for January 17th. Tickets are on sale.

Speaking of Highline Ballroom, Clipse has been added an opener for for the previously-mentioned Jadakiss and Melanie Fiona show happening at the venue on Tuesday (12/22) ("Concert starts @ 10PM"). Tickets are on sale.

A video from Raekwon's show (including the CNN appearance) below...

Raekown Brings Out CNN In Concert In NYC! from the.LIFE Files on Vimeo.