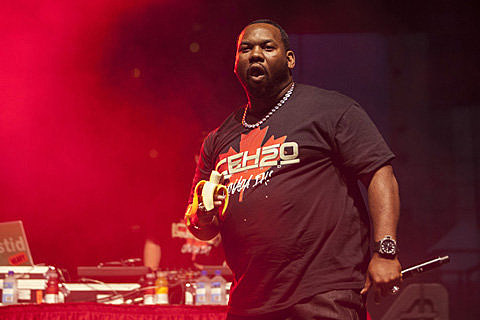 We were recently talking about hip hop shows at CMJ like Schoolboy Q, Talib Kweli, Black Moon, and more, and since then another big one was announced. Wu-Tang Clan member Raekwon will headline the AllHipHop.com 15 Year Anniversary party at SOB's on October 17. Tickets for that show are on sale now. Rae recently remixed Drake and Jay Z's "Pound Cake" from Nothing Was the Same, and you can stream that below.

SOB's is hosting some other good hip hop showcases this year too. One of those happens on October 15 with Deniro Farrar, The Doppelgangaz, Dillon Cooper, Hefna Gwap, Rod Rhaspy, Greg Grease and Sean Falyon. Tickets for that one are on sale now.

There's also one on October 17, which is especially notable because legendary NYC hip duo Black Sheep (aka Dres and Mista Lawnge) is on the lineup. But also, Sisqo is headlining, if you're into that sort of thong. I mean thing. Tickets for that show are on sale now.

Stream that Raekwon remix below...