"....a reunited Rage Against The Machine, Bjork and the Red Hot Chili Peppers will lead the lineup for the 2007 Coachella Valley Music & Arts Festival, to be held April 27-29 in Indio, Calif. Sources tell Billboard.com the event will also feature a reunion gig from Crowded House as well as the Arcade Fire, Sonic Youth, Air, the Roots, Willie Nelson, Interpol, Manu Chao and Fountains Of Wayne......The full lineup will be announced imminently; it is also expected to sport sets by Jarvis Cocker, the Good, the Bad and the Queen, Hot Chip, Peeping Tom, the Decemberists, Arctic Monkeys, Tiesto, Kings Of Leon, Travis, Rodrigo y Gabriela, Lily Allen, Kaiser Chiefs, Silversun Pickups and LCD Soundsystem. [Billboard] 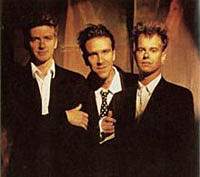 "Crowded House, one of Australia's biggest musical exports, is re-forming for a world tour. Former frontman Neil Finn and bassist Nick Seymour will hold auditions for a drummer in Melbourne this week. Auditions have also been held in Auckland and Los Angeles.
Founding drummer Paul Hester took his own life two years ago. Sources say Finn will commit 12 months to a world tour." [the Courier Mail]

I'm pretty sure I read !!! was playing Coachella too - already such a good lineup - I could almost be convinced to go this year. Who else is playing that they missed?

Are you going this year? What's your best Coachella memory? What do you think of all day hot festivals? What festival would you rather go to instead?

Did you get tickets via the presale?