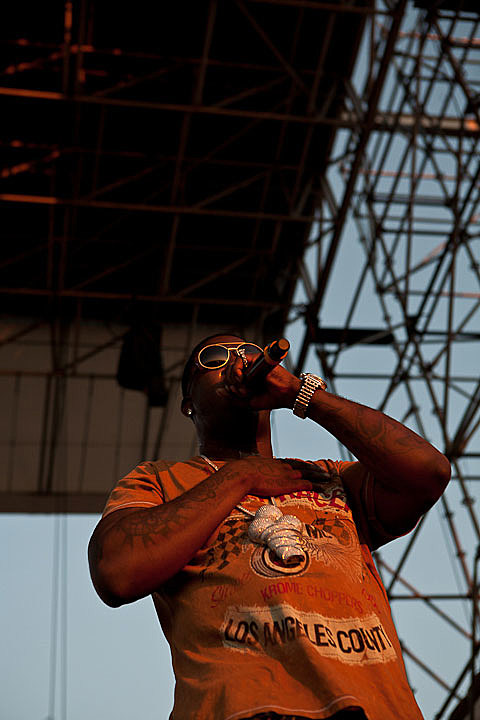 Rapper Gucci Mane has been ordered to undergo psychiatric tests, following an Atlanta court appearance on a charge he violated terms of his probation. Radric Davis, the rapper's real name, appeared before Fulton County Superior Court Judge John Goger on Monday. Davis' attorney, Michael Holmes, filed a special plea of mental incompetency on behalf of Davis, who has battled drug problems in the past. The rapper was sent to Anchor Hospital, a 111-bed psychiatric and chemical dependency treatment facility in Atlanta. Records show Davis has been in the Fulton County Jail at least five times since 2005 on drug, aggravated assault and aggravated assault with a deadly weapon charges. His court appearance stemmed from a November altercation. [AP]

It also hasn't been the greatest of days for Gucci Mane's protege Wacka Flocka Flame, who surrendered to the police in connection with drugs and weapons charges. Wacka Flocka Flame's "No Hands" currently sits at #4 on Billboard's Top R&B/Hip Hop Chart.

As previously mentioned, Questlove never rests, and in addition to all of his upcoming DJ gigs we just posted, you can also catch him this Friday, 1/7, at BB King's with special guest Rakim.

Those on the West Coast can catch Joe, along with Crooked I, Joell Ortiz and Royce Da 5'9" on Saturday, April 2, 2011, as Slaughterhouse have been added to the the sixth annual Paid Dues Festival along with Black Star, Immortal Technique and Murs. Slaughterhouse will drop a six song EP on E1 next month.

And last but not least, two humourous Kanye West-related videos are making the rounds, and you can watch both of them, below...