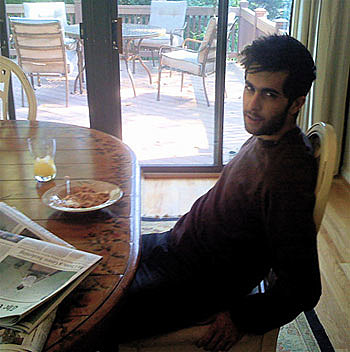 Voxtrot just had to cancel a few Canadian shows....

Sorry everyone, but Voxtrot is canceling off of both the Hamilton and Toronto, ONT shows. If you've seen the band in the last couple days, I'm sure you're aware that Ramesh has been a bit under the weather. He was taken to the hospital after last night's show in Philly, and underwent minor surgery this morning. Thankfully he's okay.

We're unsure whether Ottawa and Montreal will happen, but will definitely keep you in the loop.

That sux....both for Ramesh, for Canada, and potentially for NYC.

I say "NYC", because (I'm being selfish because) Voxtrot in fact have THREE NYC shows coming up. First let me say that sometimes people bill "special guest" on a show to try and trick people into showing up for something they deem to be "BIG". I like people to know what they're getting. Voxtrot also didn't want to trick anyone, BUT the only way I could get them to play my BrooklynVegan CMJ showcase at Bowery Ballroom on October 16th, was if we all agreed to keep it quiet until the time that their other two already-scheduled shows in Brooklyn (the two days before) were closer to selling out - it makes sense. Well, that time is now.

For $16, you're getting your money's worth (even without the added bonus of Voxtrot) - tickets are still on sale, or use your CMJ badge to get in. Tickets are also still on sale for their Music Hall shows (with the Little Ones & 1990s). Feel better Ramesh!

Voxtrot's new video for "Firecracker", and all tour dates, below.....