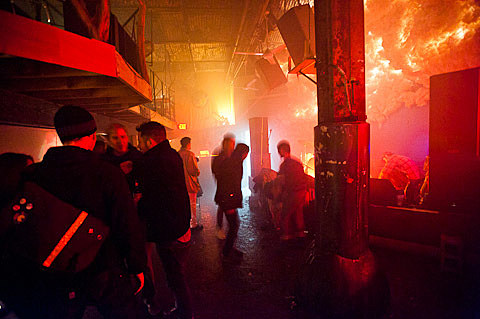 As mentioned, Glasslands will be closing out their time on Kent Ave with a New Year's Eve Party featuring four "special, secret" guests, all of whom have history with the venue. None of those guests have been revealed yet, but the night includes a one-hour open vodka bar early and a midnight champagne toast. Tickets go on sale today at 10 AM.

We asked Glasslands/Popgun's Rami Haykal and Jake Rosenthal for Top 10 lists. Rami gave us his favorite albums of 2014 (many of the artists have played Glasslands over the years); Jake gave us his 10 favorite Glasslands shows ever. You can find out who ended up their lists, below. What was your most memorable show at Glasslands?

Rami and Jake also asked us to let folks know that they are looking to collect any physical memorabilia from Glasslands, be it flyers, posters or whatever. If you have something, please get in touch at booking@theglasslands.com.