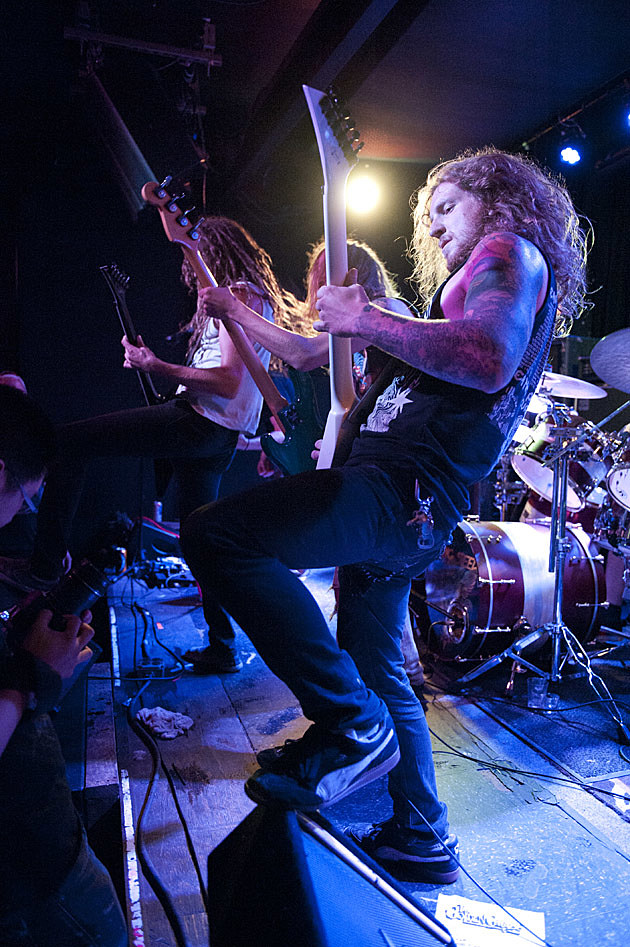 Back on Friday, October 18, we at Invisible Oranges hosted an afterparty for our CMJ showcases at the Omega Order Warehouse in Brooklyn with Ramming Speed, Phantom Glue, Aksumite and Flown. If you missed it, let me tell you it was a total blast. I got there in time to see Aksumite kill it with punk intensity during what was just their second-ever show. Aksumite's first show the day before at night one of the Invisible Oranges CMJ showcase was pretty nuts, but the band showed that they really excel in DIY-type venues -- check it out in the video of their performance in this post. After Aksumite, Phantom Glue delivered a set of sinister sludge, and then Ramming Speed came on to level the place with speed and fury. Video evidence of that is in this post too, and be sure to check out photos from both night one and two of the Invisible Oranges CMJ showcase at Saint Vitus featuring Pelican, Ringworm, Sannhet and more.

As previously mentioned, Ramming Speed are teaming up to tour with fellow thrashers Toxic Holocaust in November, but first they'll be playing a string of shows down south surrounding their performance at Gainesville, Florida's The Fest. Ramming Speed also play Saint Vitus on November 29.

Toxic Holocaust just released a video for their song "Acid Fuzz" off their new album Chemistry of Consciousness, which comes out this week (10/29). Watch the video below.

All tour dates are listed, along with videos from the IO CMJ late night party, below...