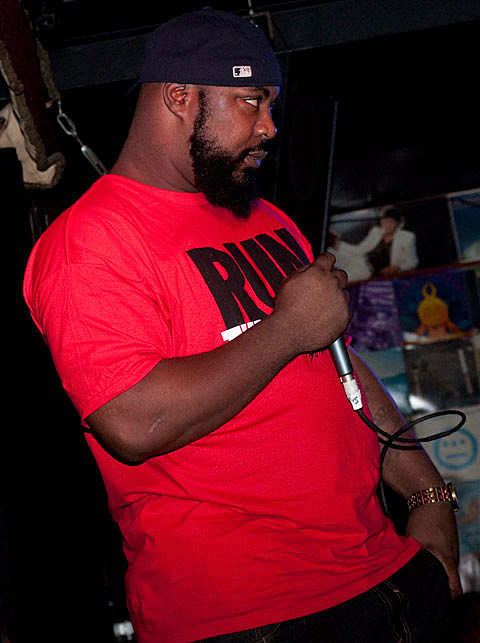 "I like no female rappers. Not like I don't like them personally; they don't hold my interest. Except MC Lyte," he told Vlad TV. "I haven't bought a female rap album since MC Lyte, Lyte as a Rock. That album? I haven't bought one since, straight up. I like none of 'em."

P was quick to clarify, explaining that he holds a soft spot for Digga. "Let me take that back. Rah Digga. She get busy too. But other than that, none of 'em. I'm not buying none of they albums. All of 'em. That's just me. I be fooled. You have a nice single. If the single is good, I'll buy the album. I got a fooled a few times. Who did I get fooled by? I was so pissed. Boss. Remember Boss? I was so pissed, b. I fell for a few, but I like no female rappers. None." -[Hip Hop DX]

I guess we won't expect to see any female MCs as special guests when Sean Price's not-supergroup Random Axe (with Black Milk & Guilty Simpson) supports Smif N Wessun with Maino TONIGHT at Highline Ballroom (6/21). DJ Envy will be on the wheels of steel in between/before the show with Angela Yee hosting. Tickets are still available.

Can't make it tomoight? Tomorrow (Wedneday, 6/22) Random Axe to play a ANOTHER NYC show, this time a headlining date at Southpaw with labelmates Black Moon and SkyZoo. Tickets are still available. The pair of shows are in addition to the crew's upcoming appearances at Rock The Bells and Brooklyn Hip Hop Fest. Brooklyn Hip Hop Fest's lineup recently expanded with the additions of Shad, Homeboy Sandman, Nitty Scott MC, Eternia, and Twilite Tone.

Random Axe is celebrating the release of their new and self-titled LP out NOW via Duck Down Records while Smif N Wessun will release their new collaborative LP with Pete Rock, Monumental, via the label on 6/28. Stream the entire Random Axe LP at Complex, and check out two recent Random Axe videos, "Random Call" and "The Hex", below.

Reminder: Duck Down signee and collaborator Talib Kweli will play a free show at Red Hook Park TONIGHT, a day before he hits The Colbert Report.

A bunch of videos and song streams are below.