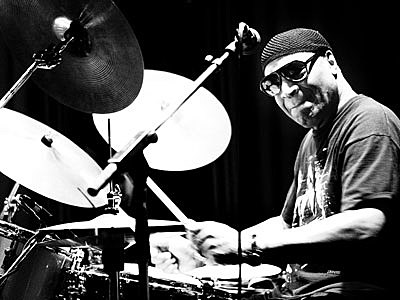 Newport's jazz festival - which this year has been christened George Wein's CareFusion Jazz Festival 55 - once again will bring some of the music's biggest and most popular practitioners to Fort Adams State Park in Rhode Island. But buried within this weekend's schedule, and relegated to a smaller stage, is a trio making a once-in-a-lifetime appearance in our neck of the woods: a free-jazz group called By Any Means.

The trio of alto saxophonist Charles Gayle, bassist William Parker, and drummer Rashied Ali play with a potency and urgency that can make your hairs stand on end. They also just happened to have made one of the greatest albums in free jazz, a 1993 date called "Touchin' on Trane,'' a collection of tunes inspired by, rather than composed by, John Coltrane. (For contractual reasons, the album was released under the artists' individual names rather than by By Any Means.) In 2008, more than 20 years after it formed, By Any Means finally released a proper album, a superb two-CD set called "Live at Crescendo'' that was recorded at a club in Sweden.

Now, for the first time, the New York-based trio will play a date in New England, at one of the most revered events in jazz lore - the Newport jazz festival.

It's not as though By Any Means has been touring extensively and merely skipped by us through the years. Free jazz is an acquired taste, sort of a professional jam session, and even its most popular artists draw relatively small crowds. By Any Means has performed only sporadically - disbanding for years at a time before regrouping - and even in a good year these guys play together only five or six times.

Though the trio claims to have no leader, Ali, 75, is its senior and most famous member. He played with Coltrane during the saxophonist's final years, most notably on the groundbreaking duo album "Interstellar Space,'' on which Ali made his mark as a drummer who eschewed keeping time and instead improvised completely independent of structure.
[Boston Globe - August 7, 2009]

Rashied Ali didn't end up performing with By Any Means at the Newport Jazz Festival on August 9th. His brother Muhammad took his place. And now, along with the news of Les Paul, comes word that "Rashied Ali died on 12 August 2009 in a New York City hospital after suffering a heart attack and undergoing heart surgery." RIP. Videos below...