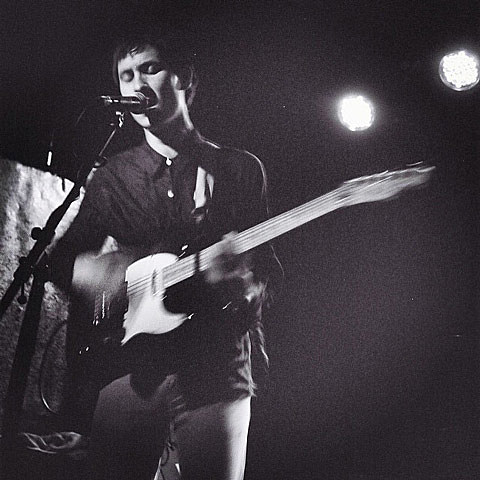 When Australian musician David West isn't making music with Rank/Xerox or with Mikey Young as part of Total Control and Lace Curtains, he's making his own bittersweet pop as Rat Columns. It's not that far off from the more tuneful moments of his other projects, but Rat Columns' new album, Leaf, is by far the poppiest thing he's done yet. (Including RC's 2012 debut, Sceptre Hole.) Made while West was living in San Francisco, the record was made at Kelley Stoltz's studio with both Stoltz and Young at the controls. There are strong nods to fellow Aussies The Church (and The Cure and The Smiths) and you can still detect the love for Wire that is much more prevelant in Total Control. West is a terrific songwriter and his whispery delivery fits the material. You can stream the whole album, and watch the video for "Fooling Around" (cowritten with Mikey Young), below.

Rat Columns are currently on tour and play NYC on Sunday (9/14) at Death by Audio with another Australian band with Mikey Young connections, The Stevens (who were just great at Baby's All Right on Thursday). Also playing are Outside World (who moved from Chicago to Brooklyn) and make power pop a la early dB's, plus newish Brooklyn shoegazers, Rips.

Available at shows on Rat Columns' tour will be a tape of unreleased David West demos titled Drop Out of Collage:

DAVID WEST'S "DROP OUT OF COLLAGE" IS A KALEIDOSCOPIC TOUR THROUGH THE MENTAL AND PHYSICAL HARD DRIVE OF DAVID WEST (LACE CURTAIN, RAT COLUMNS, RANK XEROX, BURNING SENSATION, TOTAL CONTROL AND OTHERS). A MELANGE OF RECORDINGS DATING AS FAR BACK AS 1998 AND AS FAR FORWARD AS THE PRESENT.

Look out for Drop Out of Collage at the merch table and a video trailer for it is below. Those dates include a stop, like most of the Australian bands on tour right now, at Gonerfest. All dates are listed, along with the album stream, below...