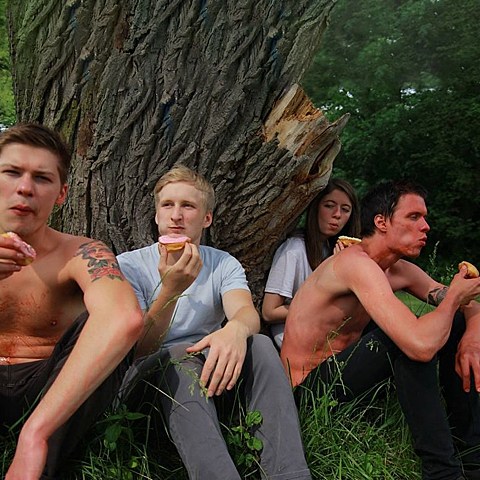 Chicago indie rockers Ratboys have been playing around their local scene for a while, and put out a self-titled EP a few years back on local label Swerp Records. They more recently signed to the larger Topshelf Records and will release their first full length AOID via the label on June 9 (pre-order). (Going by the cover art, that's presumably "void" with an inverted "v.") Singer/guitarist Julia Steiner and guitarist Dave Sagan formed the band (then known just as Ratboy) as an acoustic duo, but they later added bassist Will Lange and drummer Jordan Parel, turning Ratboys into a full-sounding rock band. The folkier roots aren't completely gone though, which gives Ratboys a similar folk-inspired-rock vibe to bands like Hop Along and Waxahatchee.

Ratboys recently put out the video for "Have A Heart," a song recorded during the AOID sessions but cut from the album, and we've got the premiere of the album's first single "Tixis." Check out both, along with a stream of their self-titled EP and their 2014 "Space Blows" / "Collected" single, below. Julia also sings in the Weezer-y band The Normal Years, and you can stream their 2014 EP below too.

Ratboys also have a tour coming up in May and June which brings them back to NYC On May 26 at Bushwick Public House (1288 Myrtle Ave) with Sirs&Madams, Naked Hugs and Kitten Ruckus. That's an all ages show with 8 PM doors and $7 admission. Ratboys were here earlier this year for a Bowery Electric show with Soft Fangs. Anyone catch that one?

Ratboys - "Have A Heart" (music video)