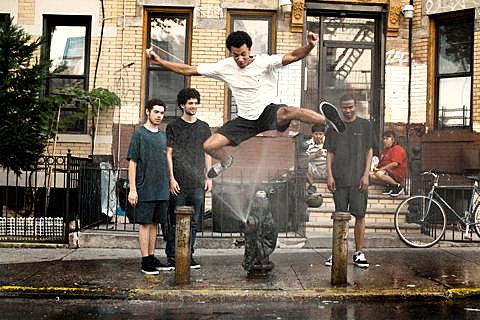 NYC rap crew Ratking (aka Wiki, Hak, Sporting Life, and Ramon) have signed to XL imprint Hot Charity (making them labelmates with Willis Earl Beal) and will release their debut EP, Wiki93, on the label on November 6. The whole thing was produced in-house by Sporting Life. You can get a taste of that EP with the song, "Wikispeaks," which is streaming below.

The band have been playing around NYC on some pretty good bills, including shows with Gunplay, Fat Tony, Smoke DZA, and more. They've got more upcoming shows this month during CMJ including a Yours Tru.ly party at Glasslands on October 19 with Joey Bada$$ (who will be rolling with his crew Pro Era), Jim-E Stack, Isaac Delusion, Evy Jane (who were supposed to make their NYC debut earlier this year but had to cancel), Night Panther and MØ. That show is free with RSVP. Then later that night (10/19), Ratking will play a free show at Mercury Lounge. The next day (10/20), they'll return to Glasslands for a show with Doldrums, Pictureplane (DJ), DJ Dog Dick, Haleek Maul, and Normally Important. $5 tickets for that one are on sale now. Their only other announced date at the moment is Pitchfork Paris.