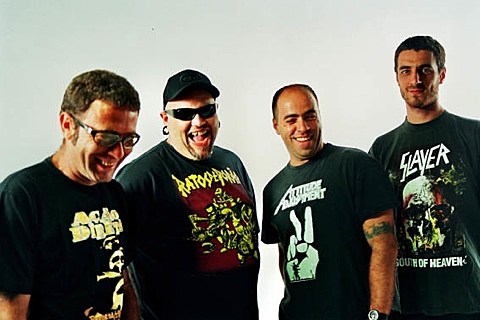 Brazilian punk/crossover thrashers Ratos de Porão aren't leaving the United States just yet. Following their appearance at Maryland Deathfest, the rats with wings have scheduled a Brooklyn show for tonight (5/27) at 538 Johnson Ave. #201 in Brooklyn. The band will be supported by Hank Wood & the Hammerheads -- who played New York's Alright last month -- and Warthog. This is RxDxPx's second stop in New York this month, following their Blackthorn 51 show on May 23.

Formed in 1981, Ratos de Porão's initial incarnation played crusty, Discharge-ing punk. Crucificados pelo Sistema, Crucified by the System, was recorded before the band split in 1983. The classic holds up, burning with a speed and aggression that foreshadows their return as thrashers in 1985. For the rest of the '80s, the group got progressively more metallic, culminating in 1989's Brasil. The LP found its way onto Roadrunner Records thanks to RxDxPx superfan Igor Cavalera from Sepultura. (Ratos' drummer on that one? A guy named Spaghetti. Because metal is awesome.) The '90s found the outfit returning to their punk roots, then back to thrash, then back to punk, and on and on. The lone constants were singer João Gordo and guitarist Jão. João Gordo later became a popular MTV Brasil VJ. Jão is Ratos' last remaining original member. However, through it all, the band's spirit never seemed to diminish.

Showmates Warthog certainly exhibit the same passion. Their latest seven inch, the Iron Lung Records-released Prison, is a punk steamroller powered by a thrilling motör. Its charging riffs and n' roll propulsion is one of the highlights of NYC punk out this year.

Flyer for tonight's show, along with streams from RxDxPx, Hank Wood & the Hammerheads, and Warthog below... 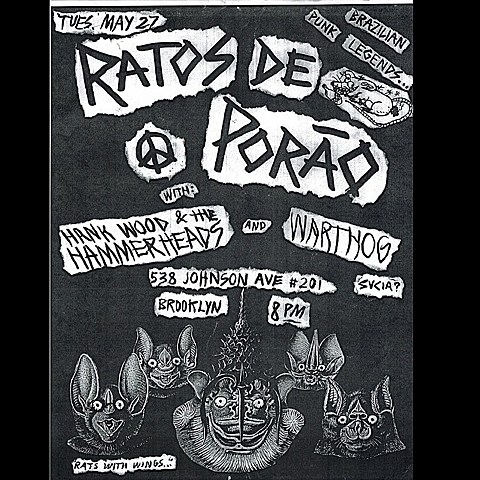