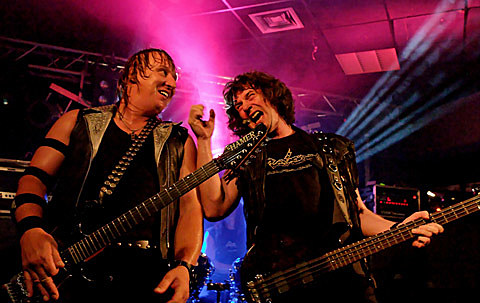 Forty years into their career, NWOBHM institution Raven will be touring this fall. The "North American Extermination Tour 2014" will pair the athletic trio with the ripping Night Demon and will roll through locations like Los Angeles, Austin, and Chicago. The two will hit NYC's Saint Vitus on November 21. Ticket information will be announced soon. All dates are listed below.

In addition, Raven will also be accompanying Accept on select dates for the latter's US warm-up run in September. Both groups are still slated to drop into NYC's Gramercy Theater on September 15. Accept's new album, Blind Rage, was released in the States on August 19.

So, with a tour happening does that mean new Raven material might be on the way? According to the band's Facebook page, yep:

been slaving over the 16 track machine refining the new songs - this album is gonna be far beyond where we thought it would be...can't wait to get this material down with the lads!!!

All of the dates are listed, along with classic live video from Raven and Night Demon's 2013 EP, below.