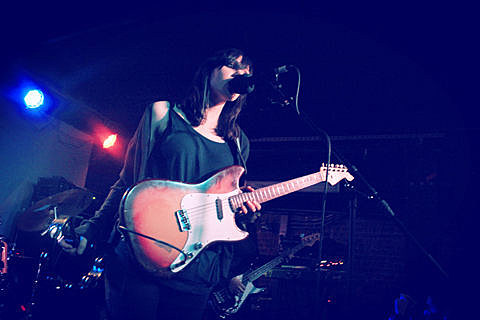 Gotye collaborator Kimbra, who appears on "Somebody That I Used to Know" and is touring with him just scheduled her own NYC show happening on March 26 at Mercury Lounge in between the two sold out Gotye shows. TIckets went on sale today at noon. She's also opening all three Foster the People shows at Summerstage, one of which is also with Tokyo Police Club.

Speaking of Mercury Lounge shows that go on sale today, Savoir Adore, who played Santos last night (3/1) (how was that?) plays the Manhattan venue on April 13 with fellow Brooklynites Field Mouse. Tickets go on sale today at noon. Field Mouse has other upcoming local dates including The Rock Shop with Polica (3/27) (sold out) and Cameo on 4/3 (tickets) and a new MP3, which you can download above or stream below.

Chain and the Gang plays Mercury Lounge one day after the Savoir Adore/Field Mouse show on 4/14 with Coasting. Tickets went on sale today.

Hess Is More play Mercury Lounge on April 27. Tickets went on sale today. They also have other upcoming NYC shows like opening for Los Amigos Invisibles at MHOW on 3/9 and opening for Mumiy Troll at Highline Ballroom on 4/3. Tickets for both of those shows are available. All dates listed below.

Ramesh and Feathers play Mercury Lounge this Monday (3/5). Tickets are still on sale.