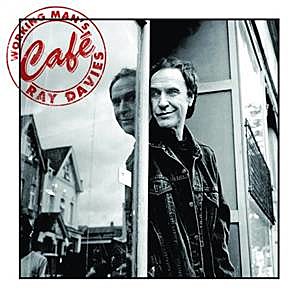 At sixty-three, Ray Davies is still pretty feisty: After getting shot during a mugging in 2004, the Kinks frontman recovered and knocked out 2006's solid solo album Other People's Lives. On this follow-up, "No One Listen" finds Davies railing at the Louisiana officials who dropped charges against the man who allegedly shot him. Elsewhere on Working Man's Café, Davies carps about globalization ("Vietnam Cowboys"), young'uns who seek advice from him ("You're Asking Me") and the loss of a local greasy spoon ("Working Man's Café"). Davies' tune sense is still relatively intact, and he turns out loose melodies amid nimble bar-band grooves. [Rolling Stone]

Will the Kinks ever reunite? Ray very-recently talked to the Canadian Press...

Davies: My brother and I get along well, as well as we've ever gotten. He was seriously ill himself. ... He had a stroke a few months after (my shooting). And he got really angry. I think when people get that sort of thing there's so much pent-up anger inside them, they feel responsible for it. I can't put myself in his shoes but he's recording at home. The others want to do it, the original band and the various incarnations of the band. It would be fun to do and I want to set a rule that we have new music as well.

CP: What do you think of these reunion tours, like with the Police?

Davies: They've milked it to death, haven't they? ... (Stewart) Copeland's a great drummer and Andy (Summer) is a good guitar player and (Sting) is good. But I saw the Police play in New York when they first came over and, I don't know, a good thing about the Kinks is, it's never the same every night.

CP: It seems a lot of fans are drawn to these reunion tours because they want to see if there'll be a blow-up on stage.

Davies (laughing): The Kinks would definitely not disappoint in that area.