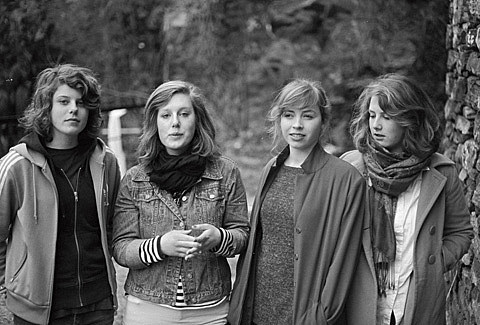 Norway's Razika make their U.S. live debut this Friday at Cameo Gallery. The band's debut album, Program 91, came out in August on Small Town Supersound and is a pretty charming 34-minute listen.

Childhood friends since they were six years old, the band formed in 2005 when the four girls were just 14 and began as a pop-punk band until they discovered reggae. These days, Razika draw comparisons to 2-Tone and Lilliput/Kleenex and you might even hear a little of Camper Van Beethoven's balalaika ska in there too. You can download two tracks from Program 81 at the top of this post -- "Eg Vetsje" is particularly stick-in-your-head catchy.

The band are here in NYC shooting a video and go back to Bergen after the Cameo show so it's you're only chance to see them for now. Razika share the bill with Ski Lodge (Smiths-y indiepop) and the laptop soul of Brooklyn-via-New-Zealand artist Lips.