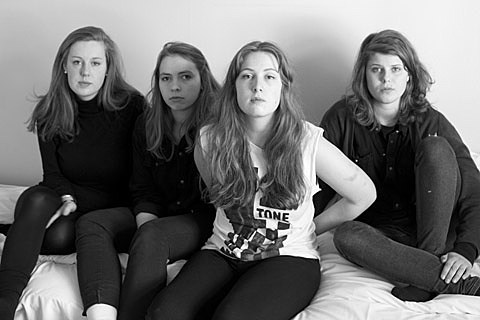 I guess this is the pre-CMJ edition of This Week In Indie which is a slightly less busy week than normal, though not by much. (And CMJ this year isn't the most exciting line-up I've seen for that matter, but we'll get to that next week.) In fact there's some pretty cool musical things you should be considering, so let's get into it.

As mentioned elsewhere on this site, Norway's Razika are playing Friday (10/14) at Cameo, their first-ever U.S. show, and only one for now. You may not think you need a Norwegian all-girl ska band in your life, and maybe you don't, but Razika do it really well. I wasn't expecting to like it. And really, what they do is more ska-tinged pop than actual ska. Which is a good thing as far as I'm concerned. There's definitely a Lilliput/Kleenex vibe (or even Electrelane for a more modern comparison) to what they do. And the songs are crazy catchy. You can get half-price tickets ($5) if you use this link.

It's a good show all around at Cameo, with Ski Lodge whose EP I like a lot. As I've said before, it's like early Smiths meets Beach Fossils. The other band on the bill is Lips which is New Zealander Stephanie Brown who now lives in Brooklyn. I like the songs on her Bandcamp page, which are kind of laptop soul, not entirely unlike Little Dragon or, you. There's a really cute video for her song "One Not Two" at the bottom of this post. 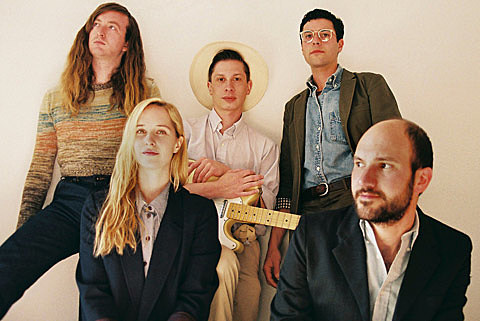 San Francisco's Dominant Legs  and tourmates Nurses are in town, playing Mercury Lounge on Friday (10/14) and Glasslands on Saturday (10/14). Dominant Legs released their debut LP, Invitation, last month on Lefse Records and it's an appealing take on effervescent '80s pop, completely with lightly funky guitars, glistening keyboards and big choruses. You can download a couple songs from Invitation at the top of this post.

As for Nurses, the Portland trio get called "psych-pop" a lot which I guess is code for "vaguely MGMT-ish" but it's the funkier side of that band and not really so much psych to my ears. There's a lot of echo on it, I guess that's psychedelic. That said, their new album Dracula is pretty catchy and danceable and is more directly comparable to fellow Portlandians Unknown Mortal Orchestra than anyone else. You can download a track at the top of this post.

And lastly, Tycho is at Music Hall of Williamsburg on Sunday (10/16). (Tickets are still available.) The Bay Area electronic artist released his new album, Drive, last week on Ghostly and I've been listening to it a lot. No doubt it owes a giant debt to Boards of Canada, more in the dreamlike synth sounds than in execution. Tracks like "Hours" (downloadable above) more blatantly danceable than BoC but it's still the kind of record you could sleep to as well. And though I no longer have a car, this would be good music behind the wheel, and not just because of the album title.

While listening to Drive, you might think that a live show might just be just a guy and a laptop, Scott Hansen has a full Tycho band that looks to be pretty good from the YouTube clips I've watched. Canada's Teen Daze are also on the bill, and blissed-out Swedes Korallreven are the DJs for the evening.

That's the major stuff for this week...though don't forget Lotion plays their first show in ten years on Monday (10/17) at Knitting Factory! More day-by-day picks are below. 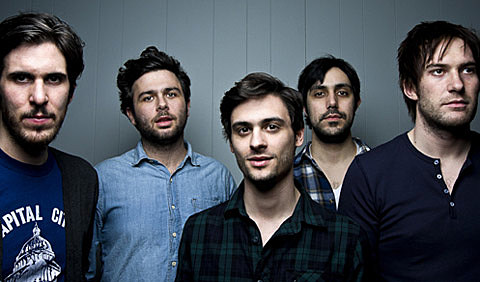 Early show tonight at Mercury Lounge: Canadian fourpiece The Arkells whose 2008 debut was one of that year's undiscovered gems, full of hook-filled, strident heartland rock that would've done gangbusters in the '80s. (You may remember me writing about them from M for Montreal.) Their new album, Michigan Left, is out next week in Canada.

I'm ashamed to admit I haven't given The Rosebuds' new album, Loud Planes Fly Low, enough attention but I definitely like what I have heard. You can download "Woods" at the top of this post. One of the nicest bands around, The Rosebuds are always good live and if you've never seen them before, they play Bowery Ballroom tonight. Want to go for free? We have a couple of pairs of tickets you can win if you email bvcontests@hotmail.com (subject: Rosebuds) right now. Include your first and last name in the email and we'll get back to the winners with instructions.

NYC indie rock mainstay Jon Spencer is currently working on a new Blues Explosion album, their first in seven years. See them work some of that new material out live at their sold-out show Maxwell's tonight. UPDATE: Cancelled.

Former Stereolab singer Laetitia Sadier plays Mercury Lounge. (Maybe you saw her open for Beirut?) Her solo debut from last year, The Trip, definitely did not get the attention it deserved.

Get your '90s on with Yuck at Music Hall of Williamsburg. They play with Porcelain Raft and The Babies tonight and tomorrow.

Real Estate play the Bohemian Beer Garden out in Astoria which sounds potentially like a lot of fun. There's often a line to get in that place on a Saturday anyway, and add in a free show from a popular band... get there early is all I'm saying.

Speaking of long lines to get in (and for beer), The Creators Project is happening.

Or you could head to 285 Kent and see the amazing Davilla 666 with Xray Eyeballs and Cassie Ramone. 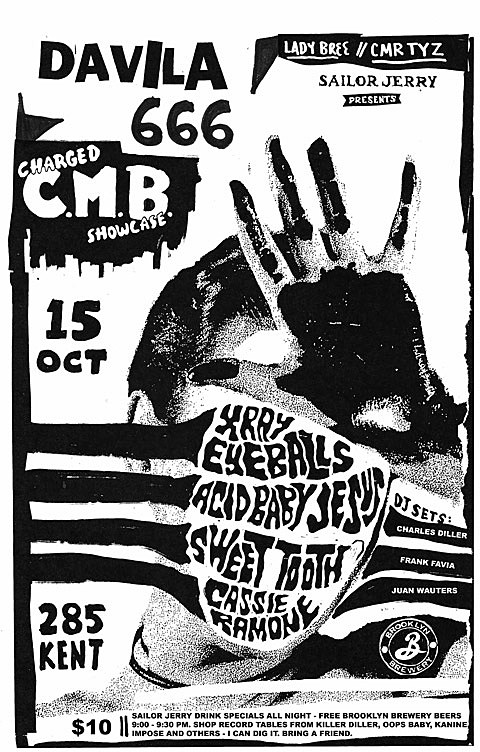 I would be remiss not to mention that Public Assembly is holding a Hummus Cookoff. Proceeds benefit the Craig Murphy Fellowship.

And that's it for this edition of TWII. Stay tuned next week for some form of CMJ coverage. Until then, flyers, tour dates and videos are below.

Lips - One Not Two

Dominant Legs - Where We Trip the Light 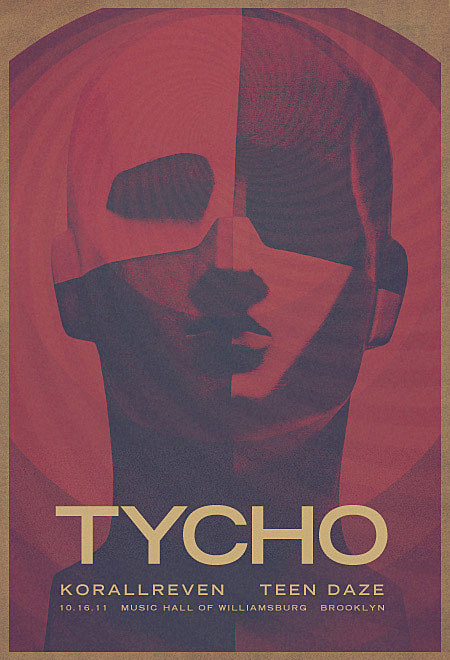