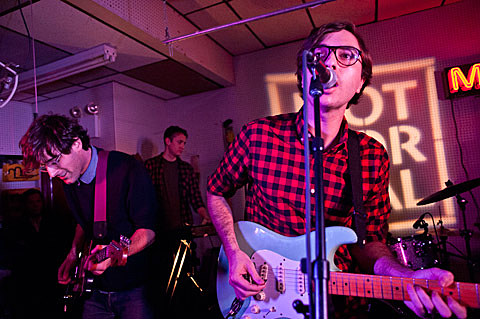 As mentioned, the closing night concert of the Big Sur Brooklyn Bridge Festival is happening May 19 at Music Hall of Williamsburg with Phillip Glass, Van Dyke Parks and Friends. To make the evening even more tempting, Real Estate (playing a stripped-down set) have now been added to bill. Tickets for that show are still available.

Speaking of, Real Estate will also be playing in the actual Big Sur for the 2013 Woodsist Festival which happens at the Henry Miller Library on September 22 & 23. The sold-out two-day event also features Foxygen (who have three shows in NYC next week), The Fresh and Onlys, Peaking Lights, The Babies and more.

There is also a Woodsist Fest date on September 28 at Pappy & Harriets in Pioneer Town, CA with Woods, Real Estate, Fresh & Onlys, Parquet Courts and more on the bill. Tickets to that show are still available.

And in other news, Alex Bleeker & the Freaks (who also play both Woodsist fests) will release their second album, How Far Away, via Woodsist on May 28. You can stream a track from the LP, "Leave on the Light," below. They'll play a NYC record release show at Knitting Factory on the same day (5/28) with Spectre Folk and King Cyst. Tickets are on sale now.

All Alex Bleeker & the Freaks tour dates are listed, along with Woodsist Fest line-ups and song stream, below.