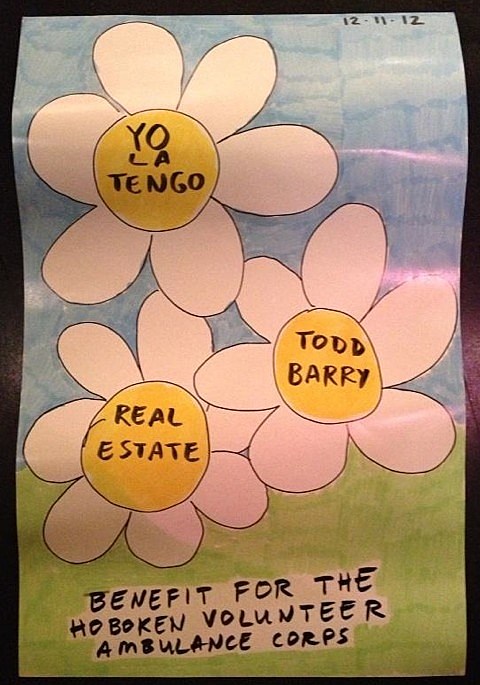 Once we decided to give all of this year's money to Sandy-related charities (last night's was Hoboken's volunteer first responders), it seemed especially appropriate to keep the opening acts close to home as well. With Real Estate, we managed to keep it close to everyone's home: formed in New Jersey, based in Brooklyn--the only thing missing was they don't seem quite so broken up about Dames closing their Hoboken location as we are. They played a beautiful set--had I been more on the ball I would have asked the name of that supercool long new song they did third.

When Alex Beeker sang his first lead vocal of the night on the second to last song of the set, he probably didn't realize the shock waves were going to still be reverberating a half hour later. But at least one person in the audience found it hilariously noteworthy: our next act of the evening, Todd Barry, who spent a minute or two questioning the set list. Just off the plane from Australia where he had performed at the Sydney Opera House, Todd announced his farewell appearance at Maxwell's, as henceforth he will be working exclusively at opera houses and palais. He will be missed. - [YLT]

For the fourth night (12/12) of their Hanukkah Week shows at Maxwell's, Yo La Tengo got fellow New Jerseyans Real Estate (who just played a hardware store in Williamsburg) plus comedian Todd Barry to open for them. Also, keeping up with the extra percussion trend we've seen all week (see Fred Armisen and The Feelies), Kid Millions of Oneida sat in on second drumkit for the entire set. Todd Barry, who can keep a beat himself, played drums in an encore cover of Blue Öyster Cult's "Burnin' for You." Martin Courtney of Real Estate came onstage to to sing the night's final song, "Our Way to Fall." The entire Hanukkah Night 4 setlist is below.

Last night's mix CD was by Shintaro Sakamoto and proceeds from the show went to Hoboken Volunteer Ambulance Corps. We've cleared the Hanukkah week hump -- any guesses on who will open for Yo La Tengo tonight (12/12)? UPDATE: It's El-P and John Oliver and YLT drummer Georgia Hubley made the mix CD. 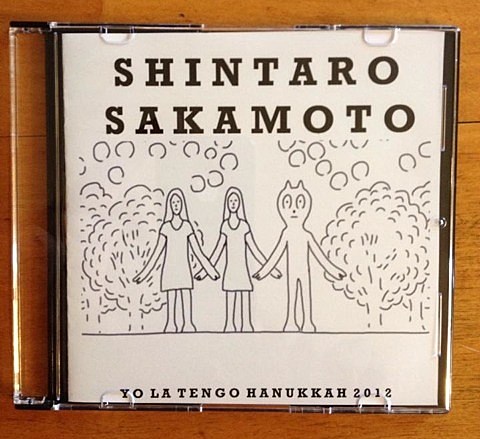