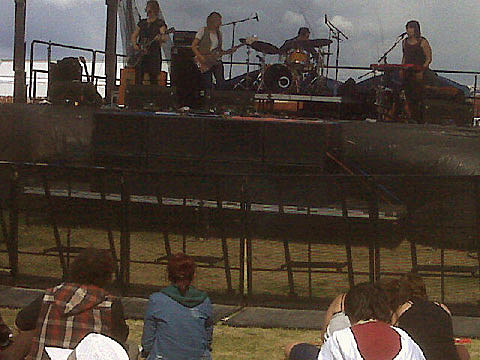 "For those who swooned over the sweet, sideways indie-pop of The Spinanes back in the '90s, the return of singer-guitarist Rebecca Gates can only be a good thing. Since The Spinanes' dissolution in 2000 -- the band was never much more than her and drummer Scott Plouf, who left in 1996 to join Built to Spill -- Gates has played with a variety of supporting players while working on her visual art and keeping a lower public profile. Her latest album is titled The Float." [NPR]

Rebecca Gates of The Spinanes played with her band the Consortium at Sasquatch Festival this weekend. Listen to her performance on NPR.

Rebecca kicks off a four-date solo tour at The Rock Shop on June 14 (she played there with her band in April). Marcellus Hall opens the Brooklyn show. She also opens for Fiery Eleanor Friedberger at Brooklyn's St. Cecilia's RC Church on June 18 as part of the Northside Festival with Ida and Spectre Folk. Tickets are still on sale.

Rebecca Gates and the Consortium will play the recently announced MusicfestNW in Portland, OR in September. According to a press release, "The Consortium may feature any and all of: Ji Tanzer (Blue Cranes), Joanna Bolme (The Jicks, Quasi), Rebecca Cole (Wild Flag, The Minders), Nate Query (The Decemberists, Black Prairie), Jenny Drizos (The Decemberists, Black Prairie), Amy Domingues (Garland of Hours), Dave Depper (Loch Lomond, Blue Giant) or any other musical genius who consents to participating."

--
Rebecca Gates and the Consortium
09/10/11 Portland, OR Backspace - MusicfestNW