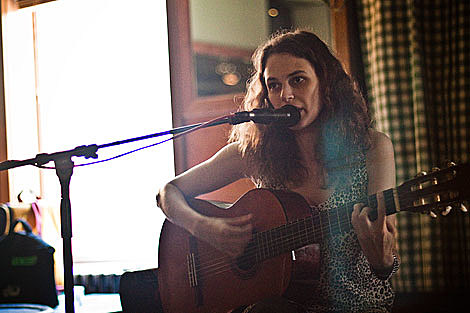 NYC's Rebecca Schiffman, armed with just her voice and an acoustic guitar, played an early afternoon, mellow set at the BrooklynVegan day party on Thursday, October 22nd at Pianos in NYC. The above picture is from that show (she went on right after Freelance Whales). Since then she opened for Thurston Moore at a book release party in a Chelsea gallery. Video from the latter below.

Rebecca plays next on Wednesday, December 2nd at Bar Nine (807 9th Ave b/w 53rd and 54th Sts) at a free show with Teddy Blanks (who she often shares bills with) and Annie Ragz. She also plays December 6th at Zebulon with Aerial East.

The "Untitled" song above is from Rebecca's second full-length album called "To be Good for a Day" (released on January 28, 2009). Video for the same song below. Around the time of the Pianos show, she put out a digital single for the autobiographical song "Me and Katie on The U.E.S." (iTunes), which she describes as "a little like The Clash meets Avril Lavigne." The full story behind the song, and a bunch of videos, below... 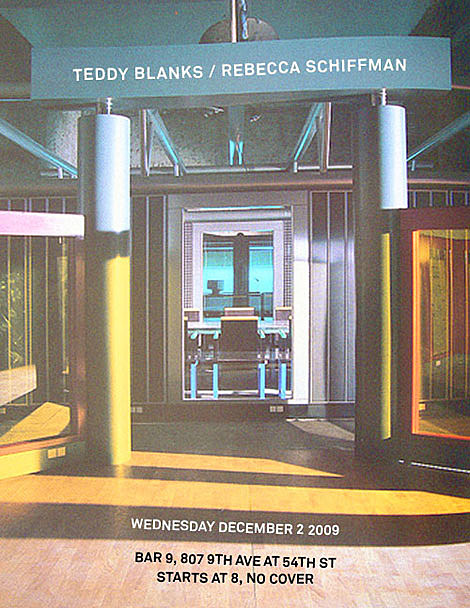 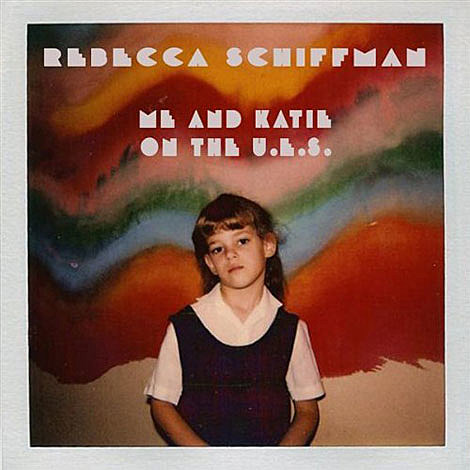 I wrote and recorded this first single, Me and Katie on the U.E.S. a few years ago, and am sending it out to the ever shrinking world of paying-for-music-customers before I finish up some newer stuff. Because I still love this song!

It's about my best friend Katie and I growing up on the Upper East Side. We grew up in the same building and were in the same class at Spence. In 2006, some NYU kids e-mailed me asking if I would let them engineer a song of mine at the Clive Davis School of Recording for homework. I was saving all my material for my next album (To Be Good for a Day) so I had to come up with something last minute. I wanted to write a song like Stay Free, one of my favorite songs by The Clash, and actually written by lead guitarist Mick Jones. I think (I hope) it ended up sounding a little like The Clash meets Avril Lavigne.
Me and Katie on The U.E.S. credits: Jay Israelson produced and mixed, Ryan Stratton played bass and guitar, Kris King played drums, Rebecca Schiffman wrote words and music and sang and made the little artwork collage, Luke Taylor and Calpin Hoffman engineered.

I'm a pretty slow songwriter, sometimes only writing two a year, so to push myself a little harder, and hopefully improve my songwriting skills, my goal for 2010 is to write, record, and release at least one song every tax quarter. Or, I guess you could say, season.

I've felt frustrated and SAD in the past to have sat on some songs for over six years while waiting to have enough material to release a full album. Songs can start to feel stale and by the time the album comes out I no longer want to perform them. I guess I didn't have to be so tied to it in the first place, but the album for album's sake format is officially obsolete now that the media on which music is available has totally changed.

So, now I will be able to record each song in its own style, without having to maintain some sort of artificial cohesion with other songs. And each song can have it's own artwork! Each song will also be the potential ground on which to collaborate with more producers, musicians, and artists.

In the works for the 1st Quarter 2010 release- a collaboration with producers Jay Israelson and Diego Duenas, and artist Michael Q. Shea.