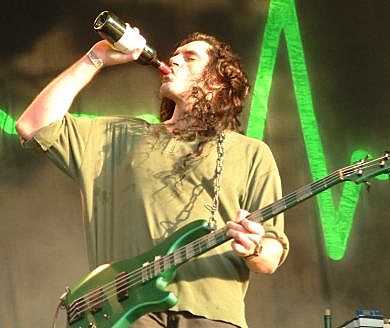 TYPE O NEGATIVE manager Mike Renault has confirmed to CBS News that the band's frontman, Peter Steele, has died. In an email, Renault said, "Peter passed away last night. As of now it appears to have been heart failure. That's all the details we have right now."

According to unconfirmed reports, Steele had been ill for days leading up to his death.

TYPE O NEGATIVE's web site left a message to their fans this morning around 5:15 a.m. It read, "The forums have been re-opened. Please play nice and expect statements from the band and family later today. Thank you for your understanding and support."

Steele was born Petrus T. Ratajczyk on January 4, 1962 in Brooklyn, New York. He stood 6' 7" (201 cm) tall, and had a low, bass-heavy voice, which was one of the most recognizable features in TYPE O NEGATIVE's music.

Type O Negative's final tour ran from October 16, 2009 at Starland Ballroom to Halloween in Detroit, Michigan. The NYC show took place October 22nd at Nokia Theatre (right in the middle of CMJ). Two days after that they played a show at Northern Lights in Clifton Park, New York. That's where HardTimes.Ca caught up with Pete Steele for a revealing video interview that included such topics as Pete's recent sobriety and religion. In it they discuss why Josh Silver wasn't playing keyboards on that particular tour. Pete says, Josh was too busy with his family and working on his "plan b". "He's smart. I wouldn't depend on me 6 months ago either." It ends with the "final words" quoted above. A must watch for any Type O and Carnivore fan - especially in light of today's tragic news. It's below with footage from the show too...