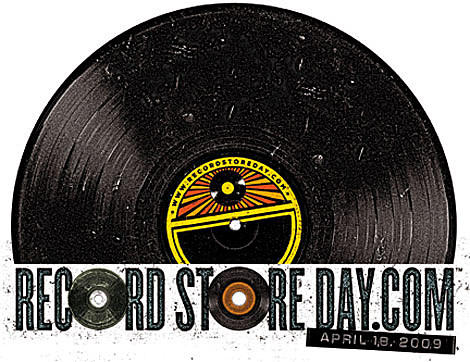 On RSD, Generation Records (210 Thompson Street, NY, NY) will host an acoustic in-store by punk band The Bouncing Souls, free for customers who pick up a copy of the band's 20th Anniversary Volume 1 7-inch the day of the show.

Other events, such as in-stores at Williamsburg's Sound Fix, which announced its intent to celebrate the event with live music despite ending shows after losing its liquor license in February, are still being announced.

Many record labels are supporting the event with limited-edition records. Matador, for example, will be pressing 2500 copies each of Jay Reatard/Sonic Youth and Sonic Youth/Beck split 7-inches, plus a Pavement Live In Germany LP. Thrill Jockey is sending out 900 copies of Records Toreism, an LP that includes tracks from Mountains, Tortoise, White Hills, Trans Am featuring Tim Soete, and Baltimore's Double Dagger (who cover "Stagger Lee") and will be packaged with two zines (feat contributions from Ian MacKaye and more).

Record Store Day, which coincides with the 2009 Coachella Festival, will also be running a record shop at the fest. The press release, copied below, notes that the Coachella on-site store, "previously operated by Virgin, is noted for its high profile foot traffic and good vibe." Both events come in the same month that the Times Square Virgin Megastore will close - the NYC shop is notable for having the nation's highest sales volume. Its sister location in Union Square will be gone soon after.

Full list of Record Store Day exclusives, in the form of a press release, below...

The organizers of Record Store Day have been happily overwhelmed by a steady flurry of support and activity from artists, record labels and retailers wishing to participate in the annual event in salutation of the independent music store. This year Record Store Day is set to feature a number of exciting new products made especially for the event from such well-known artists as Radiohead, Wilco, Tom Waits and Lucinda Williams and the Flight of the Conchords, just to name a few.

Wilco plan to release their upcoming DVD as an exclusive release to indie stores and on the band's website on Record Store Day. The group's Jeff Tweedy told Billboard Magazine in a recent interview, "Even if I wasn't in a band, I'd still support Record Store Day. It's a great thing and I'm glad we could do something special with them for our DVD."

The Decemberists will release a Record Store Day 7" as well. The band's Colin Meloy adds, "I don't know what I would do without indie record stores. Growing up in a town without them, I can tell you that it's no fun to shop for indie records at chain box stores."

You can also expect a slew of vinyl releases from Radiohead, My Morning Jacket who will release a CD as well as limited run double 10" vinyl recorded live in Louisville at record store Ear X-tacy.

Also expected are classic split 7" releases from Tom Waits and Lucinda Williams who will issue a double 7" of live tracks from Atlanta and Edinburgh, as well as Sonic Youth exclusive Record Store Day split singles with Beck and Jay Reatard.

Other indie rock elder statesmen the Jesus Lizard will release a special package to include nine 7" singles and Guided By Voices will re-release their Hold On Hope LP, with three bonus tracks.

And in the "legends" category, Bruce Springsteen, Bob Dylan, Leonard Cohen will all release RSD exclusive 7" singles. Def Jam also plans to release a 4 LP gatefold history of the label, the physical version of which will be for indies only.

Fans can expect more unique Record Store Day pieces from a diverse array of artists such as Metric, Slipknot, Jane's Addiction, The Smiths, the Stooges, MC5, Modest Mouse, Slayer, Rivers Cuomo, the Black Kids, Brandi Carlile, Taking Back Sunday, among many others.

Record Store Day, April 18, 2009, coincidentally falls smack in the middle of the dazzling desert-set festival. Promoted by GoldenVoice, Coachella 2009 boasts such an eclectic mix of big name headliners as Paul McCartney, Amy Winehouse, My Bloody Valentine, Public Enemy, TV On The Radio, The Cure, The Hold Steady, Leonard Cohen, Morrissey, Jenny Lewis, Franz Ferdinand as well as many others sure to be stopping by the Record Store Day site to peruse the shelves for records and memorabilia and hang with their fans between sets.

A number of artists performing at this year's Coachella will release product expressly for Record Store Day. Among them, Mastodon who will release "Crack The Skye" on 180 gram vinyl to include an extra 7" single and lyric sheet, Jenny Lewis will issue a split 7" with none other than Elvis Costello, and Black Keys will release a special RSD split 7" with the Flaming Lips.