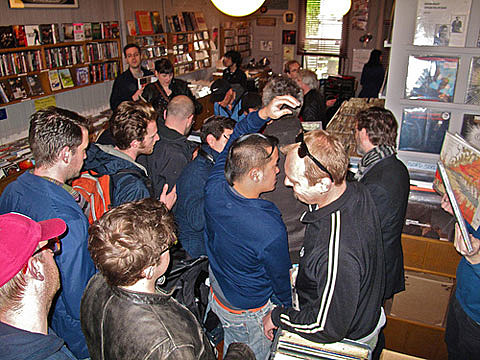 We at Permanent Records just wanted to take a moment to thank all of you so much for making this year's Record Store Day the unbelievably huge success that it was. You all helped make it the biggest weekend we've ever had, and we sincerely thank all of you for your continued support of our little record store. Hopefully you managed to get most (if not all) of the Record Store Day exclusives you were looking for. If you'd like to see photos from the big day (which, if you were at the front of the line that morning, you are probably in), click here.

We do still have some of the Record Store Day exclusives in stock... so if you haven't made it in to check out some of these limited new releases, it's still not too late! They're on display, right in front of you as you walk into the store.

So, since we're still recovering from the mayhem of this weekend, we're taking a break from our New In Stock / Back In Stock mailer this week. Rest assured, we have plenty of new records available this week, but if you wanna know what they're are, you'll just have to come in and look for them. You know, like old times.

Thanks again everyone. We truly appreciate your business.

Mystery of Two were the house band at Permanent Records on that day. The Drums and The Pains of Being Pure at Heart performed sets at Other Music. Billboard reports (via) that "this year's Record Store Day was, again, a success when measured by awareness, turnout and sales."

- Other Music had their best single day in their 14 year history.
- The Sound Garden had their busiest day in years, outpacing Christmas sales for the past couple of years.
- Vintage Vinyl sold more stuff on RSD than any other day in the stores' history.
- Twist N Shout reported the best sales they've ever had in a single day.
- RSD 2010 was Sonic Boom's single biggest sales day in their 12 year history.
- Silver Platters' sales on RSD 2010 were up 80% from last year (which were up 20% from the year before).
- Exclusive Company's RSD 2010 sales increased 102% from RSD 2009.
- Dimple did twice as much in sales from last year's RSD event.

And those numbers don't even count the RSD records that (some) stores are (allegedly) just throwing right on eBay.

Record Store Day video interviews and performances and stuff, some taped at Coachella, below...