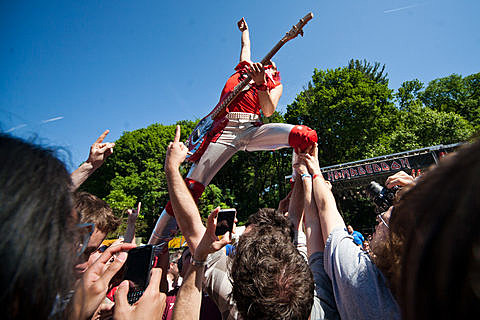 It's been quite some time since our last post. Hope you all are doing well. There's some good news and bad news today. We're kicking off another tour with Electric Eel Shock on October 12th in NYC. Also, our new split 7" w/ them will be released in October! However, we have a sad news to announce. We're sorry to have to tell you that Peelander-Red has decided to leave the band after the tour. This is sad, but we all wish Red the best of luck, and thank him for his hard work and all the unforgettable memories.

We're looking forward to seeing you all out there! Thank you so much for supporting us! We love you all!!

Sad to hear, especially since Peelander-Z is such a unit and Red is a big part of that live fun. He will be missed.

But don't mourn his departure just yet! As the band mentioned, Red will be saying goodbye on the road, including at The Studio at Webster Hall on 10/12 (tickets)

A list of all Peelander-Z tour dates and a video discussing Red's departure are below.