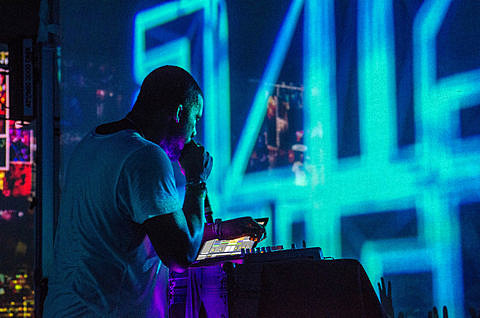 The Red Bull Music Academy began their huge NYC residency (details HERE and HERE) last night (4/28) with a party by FIXED DJs and TURBOTAX DJs. It was the first of many events that happen in NYC through May 31.

Like last night, many of these shows are shows are sold out at this point, but there's still some great ones that you can grab tickets for. On May 2, the 'Drone Activity In Progress' show goes down at the Knockdown Center in Queens with sets from Stephen O'Malley, Body/Head (aka Kim Gordon and Bill Nace), Prurient, Vatican Shadow, Hunter Hunt-Hendrix, Noveller, Mick Barr, Pharmakon, Pete Swanson, and many others. Tickets for that one are still available.

Brian Eno is doing his '77 Million Paintings' piece at Cafe Rouge on May 4, and though the first four shows of the night are sold out, if you're willing to stay up late (or wake up early), you can still grab tickets to the 4 AM show.

Tickets are still available for The Bunker party at Public Assembly on May 4 with Andy Stott, Objekt, Octo Octa, and more.

Tickets are still available to see Blondes, Rudi Zygadlo, Mike Simonetii, and others at Cameo on May 7.

You can still get tickets to see the especially interesting lineup of Big Freedia, Drop the Lime, DJ Spinn & DJ Rashad, Salva, Afrika Baambata, Egyptian Lover, and more on May 23 at Santos Party House.

Another great one is Oneohtrix Point Never, Factory Floor, Evian Christ, Bill Kouligas, and others at Saint Vitus on May 26. Tickets for that one are still on sale.

There's also the 'Pass the Gates: NYC In Dub' show at Le Poisson Rouge on May 30 which sees dub/reggae legends teaming up with younger, modern groups. The lineup includes Lee "Scratch" Perry with Subtaomic Sound System vs Adrian Sherwood, The Congos vs Sun Araw, M Geddes Gengras and the Raw Power Band, and Peaking Lights In A Dub Style vs Future Times (aka Maxmillion Dunbar and Protect-U). Tickets are on sale.

And of course, there's Flying Lotus, who brings his tour with Thundercat to Terminal 5 on May 5 and 6. Nigel Godrich's band Ultraista are on both dates. En2ak opens the first and DJ Rafik opens the second. Tickets for both nights are still on sale and we're also giving a pair to each night.

And as mentioned, Flying Lotus will be making his NYC debut under his Captain Murphy monker, during RBMA as well, at the sold-out Brainfeeder session at Music Hall of Williamsburg on Tuesday (4/30) that also features a DJ set from Erykah Badu, plus performances from The Underachievers, Teebs, Azizi Gibson, and PBDY.

Details on how to enter to win FlyLo tickets are below.

For a chance at winning tickets to see Flying Lotus at Terminal 5: either tweet something that includes both @BrooklynVegan, "FLYING LOTUS" and the date of your choice (5/5 or 5/6) in the tweet, or send an email to BVCONTESTS@HOTMAIL.COM with the subject line "FLYING LOTUS". Include your first and last name, and the date of your choice in the email. We'll pick a winner at random and contact them with more details. If you enter by email, it will not be shared with anyone else. Good luck!