Panda Bear at MHOW in 2011 (more by Amanda Hatfield) 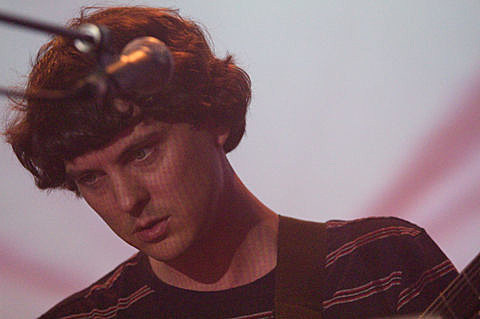 Tickets are on sale now for individual shows. Schedule and more details below...

May 1 - Bounce Ballroom: Opening night of the festival will go down at the expansive Brooklyn Bazaar with a journey through the evolution of U.S. club dance styles guided by the iconic DJ's of the respective eras. Four dance styles, four dance crews, four DJs will be featured including Voguing with MikeQ, Housing with Todd Terry, Jersey Club with DJ Sliink and Mike Gip, and Bruk Up with Bobby Konders.

May 9 - The Four Corners of the Clash: The crews from New York's 2013 Red Bull Music Academy Culture Clash will reunite at Baby's All Right in Williamsburg to celebrate the spectacle's first anniversary. The party will include sets from winning crew Trouble & Bass, as well as Que Bajo, Max Glazer and Kenny Meez from Federation Sound.

May 10 - Robert Henke's Lumière and The Haxan Cloak: Robert Henke, the acclaimed German electronic composer and founding member of Monolake, will bring his laser and sound show to the U.S. shores for the first time. Part art show, part music performance, Lumière is an exploration of synchronicity and divergence, of light and darkness, development, visual programming, and real time interaction. Henke, a professor of sound design and a co-developer of Ableton Live music software, will host the installation at the Brooklyn Masonic Temple. Also making its U.S. debut is The Haxan Cloak--the richly textured project from UK musician Bobby Krlic. His second album Excavation recently found it's way to many "Best Album of 2013" lists including the New York Times, New Yorker, Pitchfork, Spin and more.

May 11 - Larry Levan Street Party: Through his legendary residency at New York's Paradise Garage, Larry Levan elevated DJing to an art form and provided the soundtrack to one of the most fertile moments in the history of dance music. "The Paradise Garage was about the celebration of music. A deep, spiritual, heartfelt and powerful experience," notes François K at his 2013 Red Bull Music Academy lecture. As part of the local initiative to rename King Street as Larry Levan Way, the Red Bull Music Academy is proud to pay tribute to the legacy of Levan along with some of his most ardent supporters at the place that mattered to them most. On May 11 this movement will take over King Street between Varick and Hudson with sets from David Depino, Francois Kevorkian, Joey Llanos and several special guests.

May 14 - A Night Of Improvised Round Robin Duets: A carry over from the 2013 installation, this year's Round Robin Duets will again include a unique evening of live improvisation where unexpected musical encounters and a wide range of sounds from the realms of jazz, electronic, rock and experimental are the order. It will be held at Town Hall in Times Square and full details on the line-up will be available soon.

May 16 - Hardcore Activity In Progress: The Red Bull Music Academy Festival New York is building on the foundation of last year's 'Drone Activity In Progress' and upping the decibel level with this new edition. The evening will blow open the doors genre-wise to present a sampling of the most extreme recording artists in metal, techno, jazz, classical, noise, hip hop, and beyond. It will once again be held at the Knockdown Center in Queens and will feature performances by Tim Hecker, Napalm Death, Gunplay, The Thing, Wolf Eyes, Regis, Bastard Noise, Lubomyr Melnyk, Skullflower, Joe McPhee/Chris Corsano, Okkyung Lee, Clipping, Yoshiko Ohara, Reg Bloor and Gnaw.

May 18 - Panda Bear: The Academy has long been a resource to help expand the vision for artists and their live shows. One such show sees Panda Bear headlining at Warsaw, where the Animal Collective member will debut some of the new music from his upcoming solo album.

May 21 - A Conversation With D'Angelo: Sharing knowledge is one of the key beliefs of the Academy, and the Academy is excited to present a public lecture with D'Angelo at the Brooklyn Museum Cantor Auditorium. The candid talk will give the elusive R&B singer an opportunity to speak about and share his creative approach, and recall the moments that really mattered to him throughout his career.

May 28 - Hudson Mohawke & Friends Live: The highly in-demand hip-hop producer and dance specialist and half of the TNGHT duo, Hudson Mohawke will take the Webster Hall stage for his first-ever live performance. The Red Bull Music Academy alum will pull out all the stops and bring out a plethora of special guests for this sure-to-be memorable evening.

May 30 - Lit City Trax: One of New York's young club and label crews will combine with the Academy to host a special standout club event at The Westway.

May 31 - A Class of Its Own: RBMA Closing Night: Red Bull Music Academy Festival New York will close with an evening at the Abrons Arts Center with Academy alumni from the last 15 years from across the globe, bringing the Academy story to life in event form. This special event features fifteen artists on three stages including Nightwave, Anenon, Robot Koch, Yosi Horikawa, DJ NiRE, and 10 more former participants to be announced.