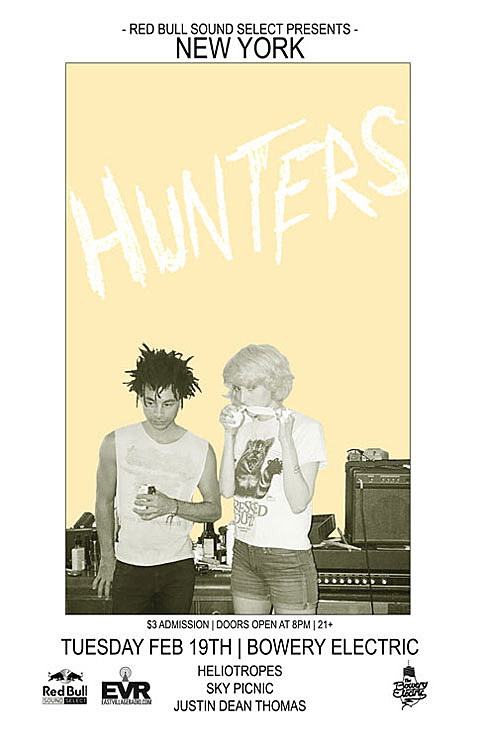 Red Bull Sound Select Presents: New York is a new monthly live music showcase that highlights some of the city's most exciting new artists. The event series, curated in partnership with East Village Radio, Afropunk, Brooklyn Bodega, and BrooklynVegan, will feature one headliner and three local artists on the rise. Each month, the showcase will rotate to a different iconic venue in New York and will introduce an exciting new line up of artists.

The first installment of Red Bull Sound Select Presents: New York will be hosted on Tuesday, February 19th at Bowery Electric [327 Bowery] featuring headliner Hunters and [other] local artists: Justin Dean Thomas, Sky Picnic, and Heliotropes. The 21+ show starts at 8PM. Tickets are $3 and can be purchased at the door.

That's the flyer up above, for the $3, East Village Radio-curated, Red Bull Sound Select-sponsored show. Stay tuned for info on the other eleven NYC shows in the series, including three put together by BrooklynVegan.

Meanwhile, you can actually catch Heliotropes (who also shared a bill with Hunters on a BrooklynVegan bill once), at the Converse presented free gig going down at Music Hall of Williamsburg tonight (2/15).

Red Bull Sound Select is also doing shows like this, with local partners, in four other cities: Chicago, LA, Nashville and Austin. Austin is also where RBSS will present a series of mid-March events that will feature some of the same local bands playing each city, especially bands that get voted in. Justin Dean Thomas, Sky Picnic, and Heliotropes are all currently competing for free plane tickets from NYC to Austin. More info including how to vote and RSVP, HERE.