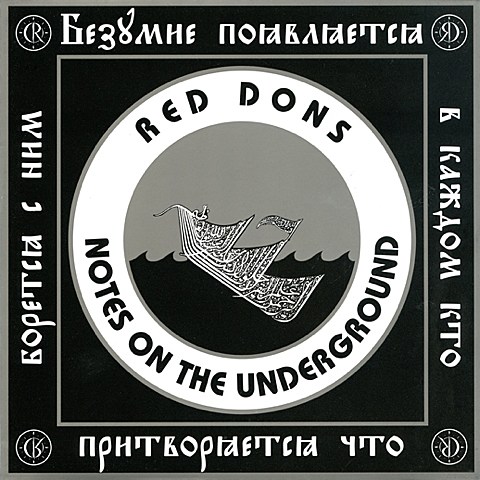 As discussed, Portland punks The Red Dons are going on a tour this month which kicks off in Brooklyn on 7/17 at Death by Audio with Blake Schwarzenbach, Nuclear Spring, and Ylajali. The tour also includes three NYC-area shows with Night Birds: New Brunswick at The Alamo on 7/24, Manhattan at Cake Shop on 7/25 with Livids, and Long Island at No Fun Club on 7/26.

The band have now just announced that after the tour is done, they'll release a new EP, Notes on the Underground, in mid-August via Grave Mistake (Night Birds, Big Eyes). The first taste of the EP is the new track "Dead Ender," which is a real ripper indebted to late '70s/early '80s down-strummed punk, and with some classic "Oh-Aye-Oh"s thrown in there too. That track makes its premiere in this post, and you can stream it below. That's the EP's cover art above.

Regarding the band's Death by Audio show, Nude Beach were initially announced as part of that bill, but were quickly removed from their show, and Jawbreaker/Jets to Brazil/Forgetters frontman Blake Schwarzenbach has since taken their spot. You can also catch Blake in Brooklyn on Friday (7/12) at Acheron with Fever Dream, Shady Hawkins, and Little Waist (tickets), and he was just announced for this year's Fun Fun Fun Fest in Austin.